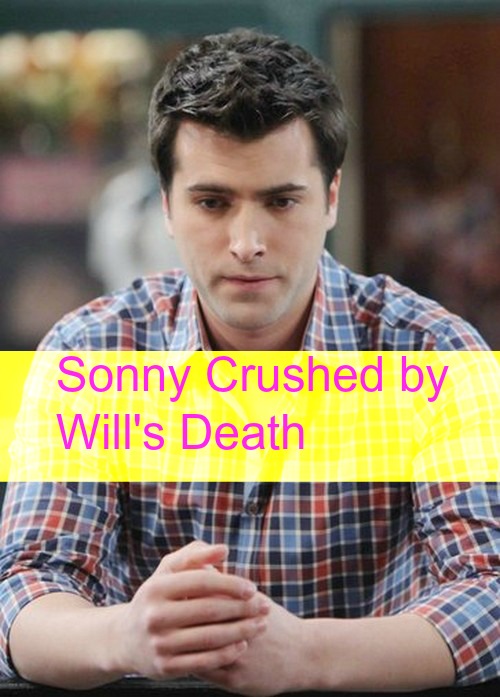 “Days of Our Lives” spoilers reveal that Sonny (Freddie Smith) will soon head back to Salem, but he won’t be in town for very long. Sonny’s return may be brief, but his scenes will certainly be powerful as he deals with the aftermath of his husband’s murder. Before Will (Guy Wilson) fades to black, it seems he’ll leave a heartfelt message that will alter Sonny’s point of view.

Sonny will decide it’s time to make the trip home, presumably so he can give his marriage one last shot. Alas, there won’t be any more chances for Will and Sonny. Their love story is wrapping up on an extremely sad note.

Once Sonny processes the news that Will is really gone, he’ll share a few weepy moments with his parents. DOOL spoilers tease that Justin (Wally Kurth) and Adrienne (Judi Evans) will try to be there for their son, but this is a tough situation. There’s nothing they can say or do to take the pain away. Sonny will be experiencing a wide range of emotions in the days following Will’s death. In addition to all the sorrow, Sonny will face some anger issues. You can bet that Sonny will beat himself up about leaving Will behind in Salem.

Perhaps Sonny will feel like he could’ve somehow prevented this if he’d only stuck around. Of course, “Days” viewers know that Ben (Robert Scott Wilson) is out of control and having Sonny around wouldn’t have changed anything. However, that won’t stop Sonny from wondering what might have been. Sonny’s anger will also extend to Paul (Christopher Sean).

“Days of Our Lives” spoilers say Sonny and Paul will have a tense encounter as they rehash old wounds. Will’s murder won’t be Paul’s fault either, but Sonny might throw blame his way for the role he played in tearing apart his marriage.

In the end, Will was the real problem in that love triangle, but Paul and Sonny weren’t exactly perfect. Nevertheless, that’s all ancient history at this point. Sonny and Paul will have to accept what happened and look to the future. Unfortunately for “PaulSon” shippers, it appears that future doesn’t include each other—at least not right now. Sonny will depart once again as he tries to move on.

As for Paul, DOOL rumors hint that he won’t be getting a new love interest anytime soon. Instead, Paul will be focused on bonding with John (Drake Hogestyn) and helping him uncover the truth behind his past. Everyone will try to keep busy as they cope with the recent loss. Stay tuned to “Days of Our Lives” for updates on how Will’s death will affect Salem.

So “Days” fans, what do you think about Sonny’s heartbreak? Can Justin and Adrienne help Sonny get through this? Will Paul try to provide support as well? Let us know what you think in the comments below and don’t forget to check CDL often for the latest “Days of Our Lives” spoilers, rumors, updates and news.