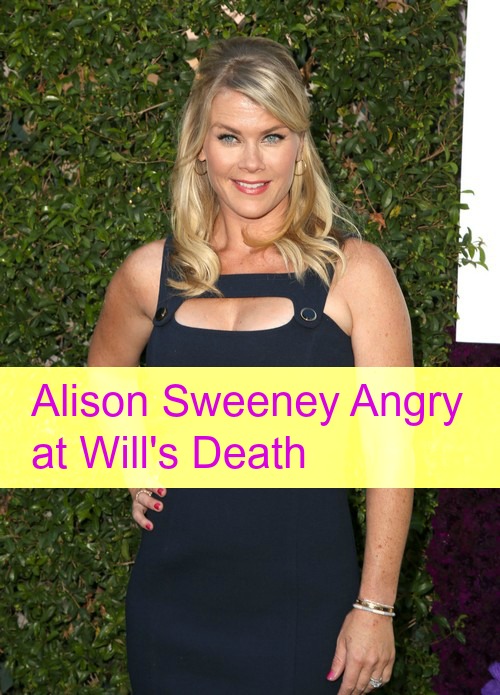 “Days of Our Lives” spoilers reveal that Sami (Alison Sweeney) is headed back to Salem on Monday, October 12. Naturally, most of Sami’s scenes will be focused on grieving the loss of Will (Guy Wilson). Many DOOL fans were shocked when they learned Will would become a murder victim and it appears Alison Sweeney felt the same way.

In fact, Sweeney was pretty broken up about the show’s decision to kill off her character’s firstborn son. In an interview with Soap Opera Digest, Sweeney vented about it a little and acknowledged that sometimes it’s tough to say goodbye.

It seems Sweeney was absolutely stunned by the plans for Will’s demise. When asked about her initial response to the storyline, Sweeney made it clear that she was not happy to hear “Days” was taking this tragic route. “Completely honestly, I was angry,” Sweeney said. “I felt betrayed and hurt that they were doing it…Personally, I think it’s a big mistake.”

Sweeney was so distraught by the plot twist that she almost opted out of a return trip to the NBC soap. “I had a crazy reaction that I didn’t want to do it and I didn’t want to go be a part of it because I was upset,” Sweeney admitted. Like the rest of us, Sweeney had to take time to process the news of Will’s imminent death. Sweeney mentioned that she went through all the stages of grief before finally coming to terms with what the show was doing.

Fortunately for “Days of Our Lives” viewers, Sweeney realized that it just wouldn’t be right if Will’s mom wasn’t around for her son’s funeral. “I am sorry they did it, but of course, I had to go there and mourn,” Sweeney said. Speaking of mourning, it looks like we’re going to see quite a bit of it from Sami over the next couple of weeks. DOOL spoilers say Sami will see the crime scene outline of Will’s body and have a total breakdown in his apartment.

Luckily, there could be a silver lining to Sami’s time in Salem. Sami may have lost her son, but her true love may be coming back to her. The rumors hint that Sami will soon get updates that lead her to believe EJ (James Scott) is still very much alive. Stick with “Days of Our Lives” to see what the future holds for Sami.

So “Days” fans, what do you think about this candid interview with Alison Sweeney? Do you appreciate Sweeney’s honesty on the subject of Will’s murder? Are you in agreement with Sweeney’s opinion that killing Will was a mistake? Let us know what you think in the comments below and don’t forget to check CDL often for the latest “Days of Our Lives” spoilers, rumors, updates and news.