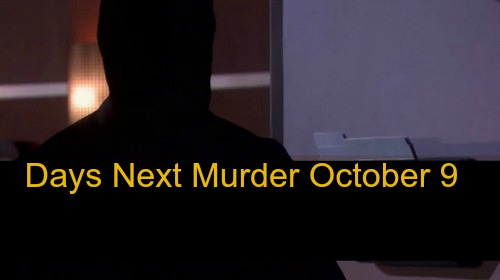 “Days of Our Lives” spoilers tease that Will’s (Guy Wilson) about to make a tragic mistake. It seems Will is going to stumble across a clue that could blow the serial killer case wide open. Perhaps Will is getting back into journalism and he’ll find a piece of evidence while doing research for an article. Unfortunately, it looks like Will won’t live to spread the word. DOOL spoilers say the murderer will strike again on Friday, October 9.

Unless there’s a twist “Days” is keeping from us, it appears Ben (Robert Scott Wilson) will continue his killing spree. Ben recently had nightmares about killing Serena (Melissa Archer) and Paige (True O’Brien). It’s clear that Ben feels somewhat guilty about what he’s done, but he ultimately believes he had no choice. In Ben’s mind, Chad (Billy Flynn) is the reason those women are dead.

Since Ben didn’t have a flashback of strangling Marlena (Deidre Hall), it might mean Clyde (James Read) was behind that attack. There’s a good chance Clyde knows what his son is up to. After all, Clyde did his best to clean up Ben’s mess in Florida. Clyde even went as far as to have a man killed in prison so the police would drop the matter.

Maybe Clyde tried to get rid of Marlena and that’s why he was out of breath when he ran into Jennifer (Melissa Reeves) moments later. Alas, Clyde won’t be around to do Ben any more favors. “Days of Our Lives” rumors hint that Clyde will likely depart within the next week or so.

Whatever Ben did in Miami may be a lot worse than a minor gambling connection. For all we know, Ben’s gone on murderous rampages before. If Ben is this obsessed with Abigail (Kate Mansi), he’s probably been infatuated with other girls in the past. It’s possible that Lani (Sal Stowers), the new cop from Miami, will eventually recall a pattern from an unsolved case in her precinct. DOOL viewers will be anxious to see if Lani will provide any updates that could lead to Ben.

Regardless of what Ben did or didn’t do in Florida, he’s certainly on a dark path now. Will’s murder could mark an important shift in this storyline. Killing Serena and Paige was about framing Chad. Ben desperately wanted to keep Chad out of Abigail’s life and he apparently thought murder was the only way to do it.

However, Ben is about to find out that it’s tough to commit the perfect crime. Ben’s in too deep and he’ll do anything to avoid getting caught. Once Will bites the dust, there’s no predicting who might be next.

For now, we’ll have to deal with the aftermath of Will’s sudden death. Alison Sweeney recently tweeted that she’d be back as Sami starting October 12. Sonny (Freddie Smith) shouldn’t be too far behind. We should all prepare for some heartbreaking drama. Stick with “Days of Our Lives” to see when Ben will finally pay for this massacre.

So “Days” fans, what do you think about the news that Will’s murder is rapidly approaching? Will you miss Will when he’s gone? Are you glad that Sami and Sonny are returning to wrap up Will’s story? Let us know what you think in the comments below and don’t forget to check CDL often for the latest “Days of Our Lives” spoilers, rumors, updates and news.