Days of Our Lives Spoilers: Robert Scott Wilson Exiting DOOL – Speaks on Ben’s Killer Challenge, Says He ‘Ran with It’ 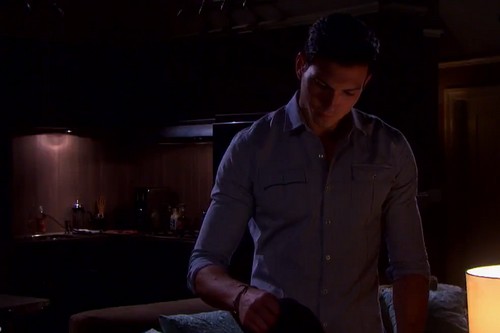 “Days of Our Lives” spoilers tease that DOOL’s murder mystery will deepen as more victims appear. However, all eyes are currently on the killer. “Days” revealed that Ben Weston (Robert Scott Wilson) is Salem’s murderer—at least for now. The rumors hint that this winding storyline could have a few surprises in store.

Nevertheless, Ben is obviously guilty on some level especially since “Days” promos call him the murderer. Ben had a box full of nearly everything that pointed the police in Chad’s (Billy Flynn) direction. After he heard the cops put an APB out on Chad, Ben ditched the mask, gloves, red neckties and flower petals down by the docks.

Ben also reconsidered his plans to leave Salem with Abigail (Kate Mansi) after a chat with Clyde (James Read). For the first time, Ben feels like he’s won. Unfortunately, that feeling won’t last long. Despite everything Abigail’s been telling Ben, “Days of Our Lives” spoilers say she’ll continue to help Chad beat the charges. If Ben gets updates on Abigail’s latest lie, he could really go off the deep end.

Many DOOL viewers are loving Ben’s dark turn. Before this storyline began, Ben was simply Abigail’s boyfriend and nothing more. The building rage and hidden agenda have given this character some dimension. Ben is connected to a string of murders and the aftermath will be devastating for almost all of Salem.

In an interview with Soap Opera Digest, Robert Scott Wilson talked about the shift in his character. It was actually quite a shock since Wilson wasn’t told Ben was the killer until after Serena (Melissa Archer) and Paige (True O’Brien) became victims. Like most actors hungry for a meaty role, Wilson jumped at the challenge.

“I ran with it because I got what I wanted: the chance to play Ben in a total arc, taking him from one set of character traits to a completely different type of person,” Wilson said. The downside is that Ben’s actions undoubtedly mean Wilson is on his way out at “Days of Our Lives.” There are probably only two options for Ben: prison or death. Clyde will likely be looking at one of those options as well.

Clyde has done plenty of dirty deeds that could land him in jail or worse, but he may have just added another transgression to the list. Right after Marlena was attacked, Clyde ran into Jennifer (Melissa Reeves) and he had trouble catching his breath. Was Clyde running away from the scene of the crime? It’s possible that Ben committed Serena and Paige’s murders, but Clyde was the one who came after Marlena (Deidre Hall).

Now the question is: what happens from here? We know Clyde’s exit from DOOL is coming within the next few weeks. When Ben learns Abigail is still in contact with Chad, he could lash out at Clyde for forcing him to change his plans. Ben thought escaping Salem would make sure Abigail was his and his alone. Since Clyde insisted that Ben wasn’t going anywhere, he might be willing to kill his father in retaliation if things don’t go his way. Of course, it’s also possible that a new killer will take over. Perhaps someone else will murder Clyde and Ben will assume Chad is to blame.

Plus, we have to remember that Will’s (Guy Wilson) murder is rapidly approaching. Ben doesn’t have a solid motive to kill Will at the moment, but that could change in the near future. If nothing else, Ben might need another murder to pin on Chad. Then again, maybe this goes back to that second killer idea. We might want to keep people like Daniel (Shawn Christian) and Aiden (Daniel Cosgrove) on our radar just in case. DOOL’s recent reveal has opened up even more ways for this storyline to play out. Stick with the NBC soap to see the next shocker.

So “Days” fans, what do you think about the news that Robert Scott Wilson is on board with the changes in Ben’s character? Are you sorry that Wilson will most likely be leaving Salem and DOOL? Where do you believe this story is headed? How could Clyde and Will’s murders tie in? Let us know what you think in the comments below and don’t forget to check CDL often for the latest “Days of Our Lives” spoilers, rumors, updates and news.