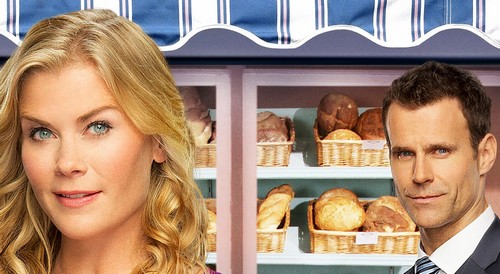 “Days of Our Lives” spoilers reveal that Alison Sweeney, who played Sami Brady, has been talking to producers about a possible return to “Days” for the NBC soap’s 50th anniversary. Michael Logan, a TV guide reporter, recently confirmed the rumors, but Alison Sweeney’s rep countered with a statement that it wasn’t a done deal. While “Days of Our Lives” fans wait for Sweeney to make it official, they can check out the Daytime Emmy nominated actress in a new movie on Hallmark Movies and Mysteries. “Murder, She Baked: A Chocolate Chip Cookie Mystery” stars Alison Sweeney as Hannah Swensen, a bakery owner whose peaceful life is interrupted by the puzzling death of a close friend.

The cookie caper flick is set in small town that sounds similar to DOOL’s Salem. The Hallmark Movies and Mysteries website calls it the kind of place where “everyone knows each other and secrets don’t stay hidden for long.” The town may seem perfect on the surface, but Hannah will quickly learn that things aren’t always as they seem. After she finds her friend/delivery driver dead in the alley behind her shop, she’ll be on a mission to uncover the truth before someone else bites the dust.

Of course, a Hallmark movie wouldn’t be complete without a love interest and “Murder, She Baked” will have one that’s familiar to longtime soap viewers. Cameron Mathison, who portrayed Ryan Lavery on “All My Children,” plays opposite Sweeney in the role of Mike Kingston. Mathison also recently became a full-time correspondent and weekend anchor for Entertainment Tonight. It sounds like both Sweeney and Mathison are staying pretty busy. We’ll give you updates on any other current projects from soap alums as well as “Days of Our Lives” spoilers on when Sami could be back in action. You can check out “Murder, She Baked: A Chocolate Chip Cookie Mystery” on May 2 at 9:00p.m./8:00c on Hallmark Movies and Mysteries.

So “Days” fans, what do you think about the news that Alison Sweeney is starring in TV movie with Cameron Mathison? Are you interested in watching “Murder, She Baked”? What about Sweeney’s possible return to DOOL later this year? Would you like to see Sami back in Salem for a while? Let us know what you think in the comments below and don’t forget to check CDL tomorrow for the latest “Days of Our Lives” spoilers, rumors, updates and news.