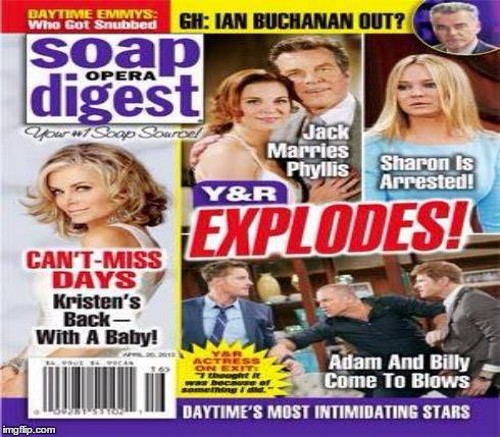 “Days Of Our Lives” spoilers and coming and going news confirms that Eileen Davidson will return to the NBC soap during the week of April 13 as the character we all love to hate – Kristen DiMera. Rumors have been running rampant for months now that Kristen DiMera was going to pop back up in Salem and be pregnant with Theresa (Jenn Lilley) and Brady’s baby. Before she left in 2014, she stole Theresa’s embryo without her knowing it. Well, according to “Days of Our Lives” spoilers, the rumors were half true – Kristen DiMera does have Theresa and Brady’s (Eric Martsolf) baby but she is not pregnant, she already gave birth!

“Days of Our Lives” spoilers in the April 20 edition of Soap Opera Digest reveal that on Wednesday, April 15th Kristen DiMera makes her big return – and she orders her henchman Clint to bring Theresa Donovan to her. If Kristen already has the baby she so badly wanted, why would she risk having Clint bring Theresa to her and revealing that she stole her embryo? Rumor has it that Kristen DiMera’s baby is in some sort of health crisis – and needs the infant’s biological mother.

Eileen Davidson dished on Kristen DiMera’s return in Soap Opera Digest and explained, “She’s obsessed with this baby. She doesn’t go anything in a small way. She has a child, so she is going all out to be a mother. For Kristen, Theresa is a means to an end. It’s not like Kristen wishes she wasn’t in this situation. However, she is willing to do whatever it takes to rectify it.”

“Days of Our Lives” rumors have been teasing for months now that Kristen DiMera was going to give birth to the baby that she stole from Brady and Theresa – so we aren’t exactly shocked by the DOOL spoilers for her return. But we are racking our brains trying to figure out what it is that Kristen needs from Theresa Donovan? It must be serious to risk Theresa finding out about the baby. What do you think, Days fans? Does Kristen’s baby in trouble, does the infant need a donor for something? Let us know what you think in the comments below and don’t forget to check CDL tomorrow for more “Days of Our Lives” spoilers and news.