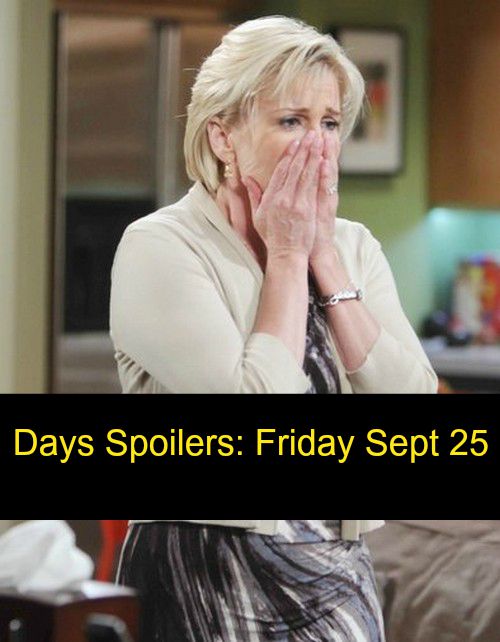 “Days of Our Lives” spoilers for Friday, September 25, tease that Andre DiMera (Thaao Penghlis) will make his dramatic return to Salem. It seems Andre has learned Stefano’s (Joseph Mascolo) health is declining and he wants to be there for him. Longtime DOOL viewers know that Andre pulled the plug on his own life support, but we’ll probably get an acceptable explanation for his return from the dead.

Chances are good that Stefano stepped in to save Andre’s life. After all, Stefano would do anything for his family, especially one of his children. As it turns out, Andre is actually Stefano’s son rather than his nephew. Now that Andre’s back in action, Stefano will try his best to keep him in line. Stick with “Days” to see how long it takes Andre to stir up trouble.

As Andre returns, another character will debut. “Days of Our Lives” spoilers reveal that Lani Price (Sal Stowers) will arrive in town as a cop from Miami. You can expect Lani to be particularly anxious to learn more about Abe (James Reynolds). Word has it that Lani may be Abe’s daughter with Tamara Price (Marilyn McCoo), a woman he dated briefly back in 1986. It sounds like a big shock might be in Abe’s future.

Meanwhile, Bo (Peter Reckell) will take advantage of an opportunity. Bo has slowly been regaining his strength through pushups and the dreadful food being plopped in front of him. It appears Bo will get a chance to escape and he’ll fight with everything he’s got. Of course, Bo is just one man and there are plenty of brutes holding him hostage. It’s going to be tough for Bo to get past a string of thugs. Luckily, Steve (Stephen Nichols) will get some new leads on Bo’s location. One way or another, Bo is coming home soon.

Other DOOL spoilers say Adrienne (Judi Evans) will receive word that her mother carries a breast cancer gene. Unfortunately, Adrienne may carry it as well. It looks like Adrienne will have a difficult waiting game on her hands. Once she has a test done, Adrienne will hope for the best and fear the worst. Could Adrienne have breast cancer? The rumors suggest this might just be a scare, but you never know. Stick with “Days of Our Lives” for updates on the health crisis Adrienne may be facing.

So “Days” fans, what do you think about the news that Andre will return and Lani will debut? Are you looking forward to seeing these characters? Will Bo break free or will his escape attempt be foiled? What does the future hold for Adrienne? Let us know what you think in the comments below and don’t forget to check CDL often for the latest “Days of Our Lives” spoilers, rumors, updates and news.