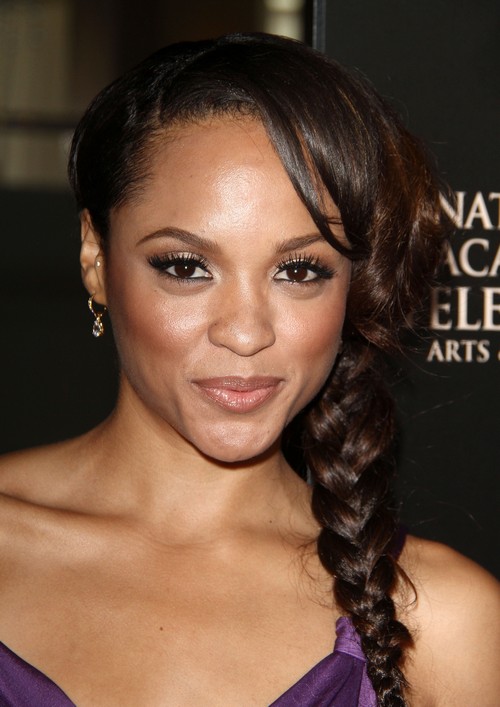 “Days of Our Lives” spoilers tease that Sal Stowers is set to debut in the role of Lani Price on Friday, September 25. It seems this new character will have a mysterious motive for coming to town. Fortunately, we’ve gathered a few clues that could point us in the right direction. Here’s what we know so far:

Lani is a cop from Miami and she’ll likely be joining the police force in Salem. “Days of Our Lives” spoilers say Lani will be particularly anxious to work with Abe Carver (James Reynolds). As Lani gets settled in, Abe will begin to notice that Lani’s apparently done her research. Abe will undoubtedly think it’s a little odd that Lani knows so much about him. “Days” just loves bringing in new characters and making them the long-lost children of Salemites. We don’t know for sure if Lani has family ties in Salem or not, but the rumors suggest that she’ll turn out to be Abe’s daughter.

In honor of DOOL’s 50th anniversary, the show has been giving nods to several previous storylines. We heard Steve (Stephen Nichols) and Victor (John Aniston) having a chat about Britta Englund (Amy Stock-Poynton). Kate (Lauren Koslow) referenced her notorious ex, Curtis (Nick Benedict), on a recent episode. Perhaps we’ll see another character from “Days” gone by become the topic of conversation. A woman named Tamara Price (Marilyn McCoo) had a fling with Abe back in 1986. Maybe that fling resulted in Lani’s birth and she ended up taking her mother’s last name.

Though it always comes out of nowhere, it’s usually helpful to give a character a connection to Salem through a relative. We saw the same thing happen with Paul (Christopher Sean) when it was revealed that John (Drake Hogestyn) was his father. We’ve also seen what can happen when characters don’t have that connection. Take Serena (Melissa Archer), for example. Serena only interacted with a handful of people during her entire time at DOOL. When Serena was killed, only Eric (Greg Vaughan) mourned the loss. No one (including most viewers) truly knew Serena enough to care.

By linking Lani to Abe, the show might be able to open up more storyline opportunities and help the character resonate with the audience. Of course, Lani may have other connections as well. Back when the role was being cast, an audition tape surfaced that mentioned Lani’s previous encounters with Chad (Billy Flynn). The dialogue suggested that the pair had hooked up when they were both in Boston.

However, the plan for Lani may have changed once “Chabby” fever took over. Chad and Abigail (Kate Mansi) definitely appear to be the couple to root for now. Plus, it’s been confirmed that Lani is from Miami. If Lani had any interaction with Chad, they’d probably have to explain it as something that happened while she was out of town on assignment. Instead, the writers may have decided to shift the story. Miami may be involved for a reason. After all, Ben (Robert Scott Wilson) ran into trouble down in Miami.

For all we know, Lani could secretly be digging up dirt on the shady Westons. If not, the writers must really love Miami. Even Eve (Kassie DePaiva) and Paige (True O’Brien) spent some time there before heading to Salem. They recognized Ben as a waiter from a restaurant they used to frequent. Does all of this mean anything? It’s tough to say, but it’s a good idea to keep everything in mind. You just never know when some minor info could actually be a major hint. Stick with “Days of Our Lives” for updates on Lani’s future in Salem.

So “Days” fans, what do you think about the news that Sal Stowers will debut as Lani Price on Friday? Are you excited to see what’s in store for Lani? Do you believe Lani will be revealed as Abe’s daughter? Let us know what you think in the comments below and don’t forget to check CDL often for the latest “Days of Our Lives” spoilers, rumors, updates and news.