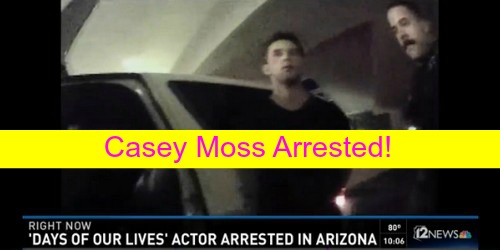 “Days of Our Lives” spoilers reveal that JJ (Casey Moss) will try to fulfill his new dream of becoming a cop. Unfortunately, JJ’s portrayer found himself on the wrong side on the law when he was arrested early Monday morning. Casey Moss traveled to Phoenix, Arizona, as part of DOOL’s current book-signing tour. Later, Moss became intoxicated at a bar located inside the W Scottsdale Hotel.

Local police say the bartender informed Moss he’d had enough to drink and an argument ensued. Moss was restrained by a friend, but he managed to break free and throw a punch. When Moss missed, he began scuffling with a different staff member before eventually being tackled by a bouncer. The police received an assault call around 12:30 a.m. and made their way to the scene.

Moss was handcuffed and an officer asked for his name. He shouted, “I’m Casey Moss and I’m an actor on ‘Days of Our Lives.’“ Another struggle began as Moss tried to pull away from the officer. Moss was wrestled to the ground as the cop tried to gain control of the situation. A short time later, Moss was transported to the Scottsdale jail. No one was injured during the ordeal.

Moss is now facing charges of assault, disorderly conduct and resisting arrest. Obviously, this isn’t the kind of news “Days” producers are looking for as they try to hype the NBC soap’s 50th anniversary. Nevertheless, too much alcohol can create risky situations that lead to media mishaps.

Freddie Smith, who just wrapped up his brief return as Sonny, was charged with vehicular assault and a DUI after a car crash last year. Smith was sentenced to community service and was not fired from the show. JJ fans will be waiting to hear what Moss’ fate will be. “Days of Our Lives” rumors hint that JJ has a big storyline in the works so we’ll have to see how things pan out. We’ll give you updates on any future developments.

So “Days” fans, what do you think about the news that Casey Moss was arrested in Scottsdale, Arizona? What will Moss’ punishment be? Do you expect Moss to face disciplinary actions from DOOL as well? Let us know what you think in the comments below and don’t forget to check CDL often for the latest “Days of Our Lives” spoilers, rumors, updates and news.