Days of Our Lives (DOOL) Spoilers: Shawn’s Back in Salem, Hates Aiden – Steve and Bo Reunite – JJ Becomes a Cop? 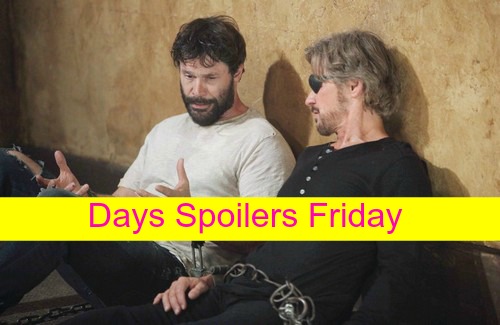 “Days of Our Lives” spoilers for Friday, October 23, tease that Shawn Douglas Brady (Jason Cook) will return to Salem. Belle (Martha Madison) and Claire (Olivia Keegan) will join him in November, but for now Shawn will spend some time with reconnecting with his mom.

Shawn will hear about all of Hope’s (Kristian Alfonso) wedding plans and he’ll grow concerned. There’s a good chance that Shawn won’t buy Bo (Peter Reckell) as a deadbeat dad. Like Steve (Stephen Nichols), Shawn might think there’s an explanation for why Bo’s stayed out of the picture for so long.

Regardless, Shawn won’t believe that Hope needs to be getting married to a shady guy like Aiden (Daniel Cosgrove). Nearly everyone but Hope has been able to see that something’s up with her fiancé. Hope probably won’t give her son’s criticisms a second thought at first, but “Days” rumors suggest she’ll start to have major doubts about Aiden next week. Until then, Hope will continue to sing Aiden’s praises.

In Mexico, Steve will face unfortunate circumstances. Poor Steve was just trying to bring his pal home and he ended up getting captured himself. It seems Bo will be on the receiving end of some bad luck as well. “Days of Our Lives” spoilers say Bo will run into trouble as he tries to get home. Bo will be thrown back in a cell, but this time he’ll have a roomie. DOOL viewers won’t want to miss Steve and Bo’s long-awaited reunion.

Back in Salem, JJ (Casey Moss) will have an announcement about his future. It looks like JJ has finally decided on a direction for his life, but his family won’t approve. “Days of Our Lives” spoilers indicate that Abigail (Kate Mansi) and Jennifer (Melissa Reeves) will try to discourage JJ from his new career path.

We don’t know for sure what job JJ has in mind, but a position in law enforcement might fit the bill. DOOL rumors have been hinting that JJ would become a cop soon. JJ was slightly impulsive when he went after Clyde (James Read) on his own, but he showed great courage and the ability to stay calm under pressure. The Salem PD could always use bold rookies who can think fast. Stick with the NBC soap to see if JJ will choose to protect and serve his community.

So “Days” fans, what do you think about the news that Shawn D will be suspicious of Aiden? How will Bo and Steve escape? Will JJ give Abigail and Jennifer updates on his cop dreams? Let us know what you think in the comments below and don’t forget to check CDL often for the latest “Days of Our Lives” spoilers, rumors, updates and news.