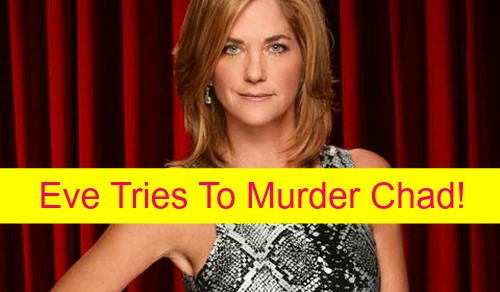 “Days of Our Lives” spoilers tease that Eve (Kassie DePaiva) will sink deeper into despair. When Paige (True O’Brien) was brutally murdered, Eve’s life was torn apart. Eve has been trying to pick up the pieces and she’s been doing fairly well.

However, it seems Eve will have a major setback. People often cycle through the stages of grief several times before they finally come to grips with their loss. It looks like Eve is headed back into the anger phase and it’ll cause her to take matters into her own hands.

DOOL spoilers indicate that Eve will stop by the hospital and walk right into Chad’s (Billy Flynn) room. Sami (Alison Sweeney) already tried to kill Chad, but Marlena (Deidre Hall) interrupted her before she could finish the job.

Poor comatose Chad will have another devastated mother coming after him. It makes you wonder just how incompetent Chad’s guards are. These cops need to put down the doughnuts and start watching the door. Nevertheless, it appears there may not be anyone to stand in the way of Eve’s desperate plan for revenge.

Of course, Chad is a fan favorite in a front-burner storyline. We all know this isn’t the end of the road for the young DiMera. It’s not entirely clear how Chad will get out of this jam, but you can rest assured that he will. Perhaps Chad will wake up and plead his case as Eve starts to do the deed. The timing lines up with the events following the incident.

“Days of Our Lives” spoilers reveal that Chad will be alert soon after Eve’s murder attempt. Chad should get quite the adrenaline rush if Eve’s ready to strike when he opens his eyes—er, eye. Chad currently only has one usable peeper thanks to Ben’s (Robert Scott Wilson) rage. Hopefully, Chad will have the use of both of those baby blues once the bandage comes off.

When Chad’s up and at ‘em, he’ll have even more trouble to deal with. “Days” spoilers say the police will have plenty of questions about the murders and Chad’s fight with Ben. Will Chad be able to convince the cops he’s innocent?

It’s doubtful, but Chad will at least try to point the finger at Ben before the evil Weston spawn strikes again. DOOL rumors hint that it’ll be a while before Ben gets what’s coming to him. Stick with “Days of Our Lives” for updates on the twists and turns ahead.

So “Days” fans, what do you think about the news that Eve will try to kill Chad? Will Chad wake up and tell Eve she’s got the wrong guy? What about the police? How long will they hold Chad responsible for the killing spree? Let us know what you think in the comments below and don’t forget to check CDL often for the latest “Days of Our Lives” spoilers, rumors, updates and news.