‘Days of Our Lives’ Spoilers (DOOL): Chad Blacks Out, Fears He Murdered Serena – Patch Returns with Joey, Back for Good

“Days of Our Lives” spoilers tease that a shocking event is about to shake up Salem. The murder mystery will get started during the week of August 24-28 and we now know who the first victim will be. DOOL’s weekly preview video tells us that Serena (Melissa Archer) will soon bite the dust. Word has it that Xander (Paul Telfer) is also headed out this week, but he’ll likely be sent to jail or decide to skip town. Nevertheless, there will be plenty of action left on “Days” without the diamond duo.

DOOL spoilers say Serena’s string of bad luck will begin with a chance encounter. Serena and Chad (Billy Flynn) will both feel rather blue and they’ll figure a good dose of alcohol will brighten the mood. Unfortunately, it looks like Chad’s ugly side will emerge once he’s a few drinks in. Serena will give Chad an impressive slap before leaving the club. The fact that Serena and Chad were seen together in a very public place could be important later on. 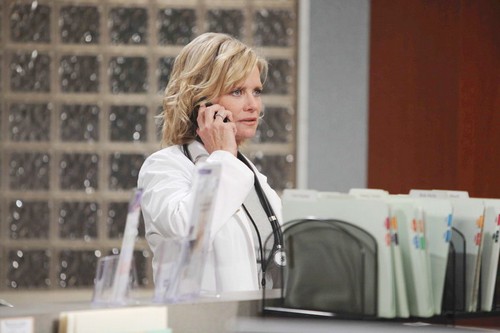 The next morning, Chad will wake up with a hangover and no recollection of what happened the night before. Once Eric (Greg Vaughan) discovers Serena’s lifeless body, there’s a good chance that Chad will be suspect numero uno. Chad may have a tough time fighting any potential charges since he was seen with an angry Serena just before her death. When you tack on the fact that Chad can’t remember a thing, you’re dealing with a dire situation. However, you probably shouldn’t bet on Chad as the real killer. The rumors hint that there’s much more to the story. After all, this wouldn’t be a mystery if the first suspect was the true murderer.

Of course, this week won’t be all doom and gloom. “Days of Our Lives” spoilers reveal that Steve “Patch” Johnson (Stephen Nichols) will arrive and he’s sure to bring a smile to your face. It appears Joey (James Lastovic) was ordered to attend boarding school, but he decided that just wasn’t his thing. Runaway Joey will quickly be picked up by Patch and brought back to Salem. Patch will feel the need to stick around for Joey as well as Kayla (Mary Beth Evans). Will Patch be able to win “Sweetness” over? Stay tuned to “Days of Our Lives” for updates on their reconciliation.

So “Days” fans, what do you think about the news that Serena will be the first murder victim? Will Chad find a way to clear himself? Are you looking forward to seeing Patch make his triumphant return? Let us know what you think in the comments below and don’t forget to check CDL often for the latest “Days of Our Lives” spoilers, rumors, updates and news.