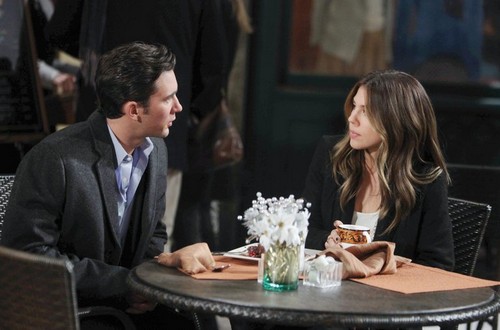 “Days of Our Lives” spoilers for Monday, April 27, hint that Abigail (Kate Mansi) will be stunned when Chad (Billy Flynn) leans in for a kiss. Chad is secretly working to get rid of Ben (Robert Scott Wilson) and win back Abigail’s heart. However, DOOL fans know that Chad’s motives aren’t entirely pure. Chad plans on getting revenge once Abigail falls for him, but will a passionate kiss change his mind? Chad and Abigail have been dancing around their chemistry ever since he came back to Salem. It’s clear that they still feel something for each other.

Abigail shut Ben down when he asked her to move in and she was upset when she learned he was keeping secrets from her. It looks like the further Abigail drifts from Ben, the closer she’s becoming to Chad. Abigail will fight her feelings for as long as she can, but the rumors say she’ll be back together with Chad soon enough. Stay tuned to “Days of Our Lives” to see the kiss that could pave the way for a “Chabby” reunion.

Other “Days of Our Lives” spoilers tease that Theresa’s (Jen Lilley) dream vacation will turn into a total nightmare. Theresa thought her life had changed thanks to Clint’s (Lucas Kerr) lotto jackpot, but there’s something else that will bring far bigger changes. Kristen (Eileen Davidson) has Theresa’s child at the DiMera castle and she’ll get a chance to meet her son later this week on “Days.” Theresa will finally understand that Clint has been setting up Kristen’s scheme, but there’s not much she can do about it. It seems Theresa will have to face Kristen head on and hope she can survive.

Meanwhile, Adrienne (Judi Evans) and Kate (Lauren Koslow) will have a major war of words. Thanks to Kate, Victor (John Aniston) found out that Adrienne has been having an affair with Lucas (Bryan Dattilo). Adrienne will confront Kate about how she threw Lucas under the bus for the sake of her career. Kate took her own son’s job so she probably deserves whatever she has coming. Stick with DOOL to see if Kate can take what Adrienne dishes out.

So “Days” fans, what do you think about the news that Chad will kiss Abigail? Will Abigail find herself torn between Chad and Ben? What will Theresa do when she gets updates on what Clint is up to? Will Kate ever be able to repair the damage she’s done? Let us know what you think in the comments below and don’t forget to check CDL tomorrow for the latest “Days of Our Lives” spoilers, rumors, updates and news.