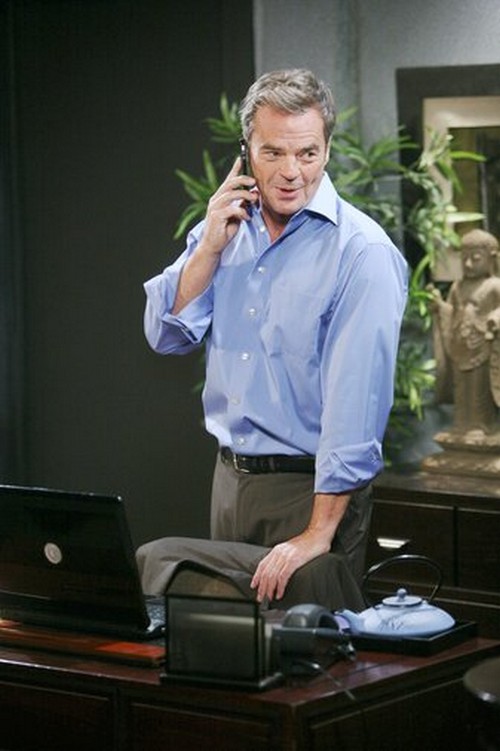 “Days of Our Lives” spoilers for Friday, April 24, tease that Adrienne (Judi Evans) will have an intense discussion with Justin (Wally Kurth). DOOL fans know that things have been strained for the couple lately. Justin admitted to cheating with a coworker in Dubai and he refused to end the affair because it could jeopardize his business deal. Since Adrienne had already been growing closer to Lucas (Bryan Dattilo), she took Justin’s actions as her cue to move on. However, “Days” rumors say that Adrienne doesn’t know the whole story. Justin has treated Adrienne poorly, but his affair may not be everything it seems.

Regardless of what happened in the past, Adrienne and Justin will have to find a way to look forward. Whether they make up or break up, they’re going to have a lot to sort out. “Days of Our Lives” spoilers reveal that Justin will get in touch with Sonny (Freddie Smith) to give him updates on the situation. Adrienne already gave Sonny a few details, but Justin may try to provide some type of an explanation for his behavior. Justin is already losing his wife and he doesn’t want to lose his son as well. Stay tuned to “Days of Our Lives” to see if Justin will share his side of the story.

Other DOOL spoilers hint that Kristen (Eileen Davidson) will make a surprising admission to Melanie (Molly Burnett) and Brady (Eric Martsolf). Kristen has been denying that she had anything to do with Theresa’s (Jen Lilley) embryo theft, but it looks like she might have to come clean. Melanie found the baby and Kristen’s going to have a hard time getting Brady to buy her lies when the evidence is cooing and gooing right in front of them. However, by forcing Kristen to confess, Brady and Melanie are playing with fire. Stick with “Days of Our Lives” to find out if they’ll get burned.

So “Days” fans, what do you think about the news that Adrienne and Justin will talk about their struggles? Is there hope for their marriage? What about Justin’s conversation with Sonny? Will Justin try to explain what he was thinking? Will Kristen admit that the baby isn’t really hers? Let us know what you think in the comments below and don’t forget to check CDL tomorrow for the latest “Days of Our Lives” spoilers, rumors, updates and news.