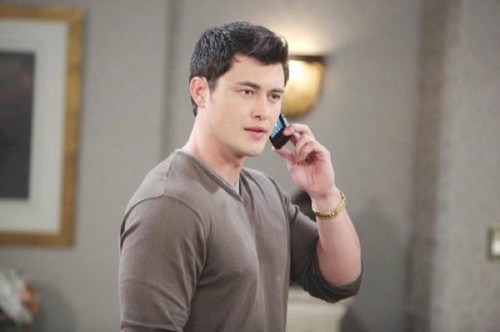 “Days of Our Lives” spoilers indicate that a huge secret is about to be revealed in Salem. Someone will finally learn that Eve (Kassie DePaiva) and JJ (Casey Moss) have been sleeping together. The question is: who will be the first to know? Daniel (Shawn Christian) has been suspicious of JJ’s jumpiness lately. He tried to get to the bottom of things, but JJ shut him down. Could Dr. Dan keep at it until JJ breaks? It’s certainly a possibility. Then again, Jennifer (Melissa Reeves) has been nosing around, too. Perhaps she’ll be the one who makes the discovery. Of course, we can’t count out characters like Theresa (Jen Lilley) or Adrienne (Judi Evans). Those two are known for their knack of butting in where they don’t belong. Eavesdropping is Salem’s most popular pastime so nearly anyone could overhear the juicy details.

Once the secret’s out, it’s only a matter of time before everyone in town is in on it, including Paige (True O’Brien). Keep watching DOOL to find out who will learn the shocking news and see how fast it travels.

Another secret could surface on “Days” in the near future. “Days of Our Lives” spoilers hint that Tori (Hira Ambrosino) will panic when she recognizes a familiar face. It appears Paul (Christopher Sean) may have more ties to Salem than he thought. Could the person Tori knows be Paul’s father?

We’ll have to wait and see, but with all the rumors swirling about Paul’s history, it definitely seems like an option. Whatever the case, you can bet things will become even more complicated for the Noritas. Maybe this means Paul will decide to stick around for a while. If he does, it could make Will (Guy Wilson) and Sonny’s (Freddie Smith) problems even harder to work out. DOOL viewers won’t want to miss a minute as Paul’s storyline takes an interesting turn. Stay tuned to “Days of Our Lives” in the coming weeks.

So “Days” fans, what do you think about the big reveal of Eve and JJ’s secret? Who will find out first and will loose lips spread the word? Are you ready to see it all blow up? What about Tori’s dilemma? Who will she see and why will she panic? Has she been hiding Paul’s father from him all these years? Let us know what you think in the comments below and don’t forget to check CDL tomorrow for the latest “Days of Our Lives” spoilers and news.