‘Days of Our Lives’ Spoilers: Freddie Smith Confirms He’s Out as Sonny – Clyde Threatens Will – Brady and Melanie Escape 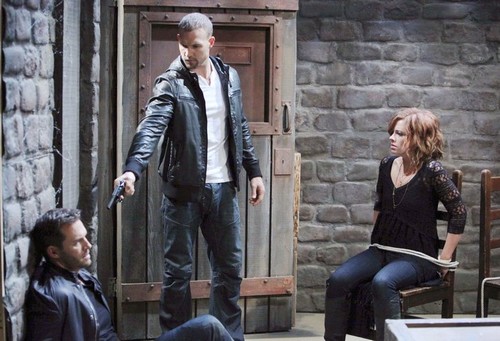 “Days of Our Lives” spoilers for Tuesday, April 28, tease that Clyde (James Read) will urge Will (Guy Wilson) to find someone else to write about—or else. Clyde has plenty of skeletons in his closet and he doesn’t want Will digging around. Will has been adamant that this article is going to happen whether Clyde likes it or not, but Will doesn’t seem to understand who he’s dealing with. For Clyde, deciding to have someone killed is as simple as deciding what he wants for breakfast. Will could pay a steep price for trying to expose Clyde’s shady underworld. Keep watching “Days” to see if Will is making a big mistake.

As if Will didn’t have enough to worry about, he’ll soon have to part ways with Sonny (Freddie Smith). Freddie Smith used a Facebook post to officially confirm that he left the NBC soap. The Daytime Emmy winner thanked everyone at DOOL for “one of the most amazing experiences” of his entire life and added that it would always be his “home away from home.” It was recently reported that Smith had filmed his final scenes. The rumors say the door has been left open for Smith to return so it sounds like we won’t see a recast in the near future. The remainder of Smith’s episodes should air through late summer. Stick with CDL for updates on how Sonny will make his exit.

Other “Days of Our Lives” spoilers hint that Brady (Eric Martsolf) and Melanie (Molly Burnett) will try to give Kristen (Eileen Davidson) the slip. Melanie and Brady learned the truth about Theresa’s (Jen Lilley) baby and Kristen’s not about to let them take Christopher away. They’ve been instructed to say their final goodbyes and prepare to meet an untimely end. However, we all know “Days” writers aren’t going to kill off a hunk like Brady. Instead, Brady will work to free himself from his restraints and save the day. It appears that someone else may beat Brady to the punch. “Days of Our Lives” spoilers indicate that Marlena (Deidre Hall) will thwart Kristen’s evil scheme. Stay tuned to DOOL to see the old rivals face off.

So “Days” fans, what do you think about the news that Will could put himself in harm’s way? What about Freddie Smith’s on-air departure later this summer? Does this mean Sonny’s marriage to Will is over? Will Marlena’s arrival help Brady and Melanie out of their jam? Let us know what you think in the comments below and don’t forget to check CDL tomorrow for the latest “Days of Our Lives” spoilers, rumors, updates and news.