Days of Our Lives Spoilers: Hope Is In Danger, Melanie Hiding A Secret From Brady, Nicole Works To Win Daniel Back 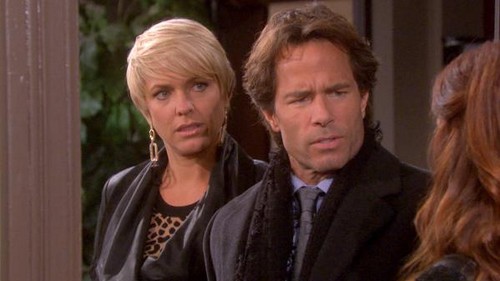 “Days of Our Lives” spoilers tease that the DOOL writers have some exciting storylines lined up for February Sweeps, and Days fans are in for a real treat. DOOL rumors have been floating around for months that Hope’s new love interest, Aiden, is harboring a dark secret – and could have actually murdered his ex-wife. “Days of Our Lives” spoilers in the latest edition of CBS Soaps In Depth tease that Aiden’s dark secret will finally be exposed in February 2015, and rumor has it DOOL fans will not want to miss an exciting second of the big reveal.

“Days of Our Lives” spoilers in CBS Soaps In Depth tease, “Hope’s in danger! A visit to the vacation home that Aiden shared with his late wife isn’t exactly a trip to paradise for Hope! As she begins to fear for her life, the detective realizes that she doesn’t know her new beau nearly as well as she thought she did.” DOOL casting news confirmed months ago that Julie Tolivar will be appearing on the NBC soap in February as Meredith, Aiden’s (Daniel Cosgrove) wife. Rumor has it that she could still very well be alive, or she could be a ghost that haunts Hope while she is at the vacation house.

In other “Days of Our Lives” news, CBS Soaps In Depth teases that in February the truth about Will’s affair and cheating on Sonny will finally come to light, and all hell will break loose when the truth is exposed. Also, Melanie (Molly Burnett) and Brady’s relationship is already in trouble because she is keeping a huge secret from her new beau, and when she isn’t busy sneaking around behind Brady’s back she will be helping Nicole (Arianne Zucker) win back her father Daniel. “Days of Our Lives” spoilers tease that during the month of February DOOL fans can also expect some major drama between Chad DiMera (Billy Flynn), Jordan, and Rafe (Galen Gerring).

So Days fans, do you think that Aiden murdered his wife Meredith? Is Hope (Kristin Alfonso) in serious danger, or could Meredith still be alive? Is Melanie and Brady’s relationship doomed? What about Nicole and Daniel – will they get back together? Let us know what you think in the comments below and don’t forget to check CDL tomorrow for more “Days of Our Lives” spoilers and news.