BY Heather Hughes on May 12, 2015 | Comments: 4 comments
Related : Days of Our Lives, Soap Opera, Spoiler, Television 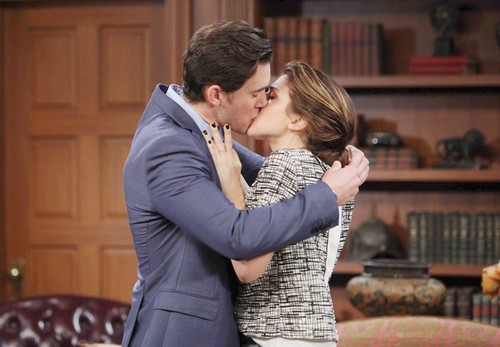 “Days of Our Lives” spoilers for Tuesday, May 12, reveal that JJ (Casey Moss) will realize Eve (Kassie DePaiva) had to be behind his recent run-in with the law. It looks like Eve and Cole (Riley Bodenstab) went one step too far this time. JJ knows that Eve could try to set him up with drugs again and that’s a risk he can’t take. There’s no way JJ is going prison because of Eve’s antics. JJ will make up his mind that this constant battle with Eve has to stop and he’ll do whatever it takes to make sure that happens. DOOL rumors say that Paige (True O’Brien) may find out about JJ’s affair with Eve next week. Stay tuned to “Days of Our Lives” to see how Paige will get the shocking news.

Meanwhile, Marlena (Deidre Hall) will find herself in fear for her life. “Days” spoilers tease that Stefano’s (Joseph Mascolo) minions will kidnap Marlena and force her to take a return trip to Italy. It sounds like Stefano has some sinister plans for Marlena at the DiMera castle. Later this week, Stefano will order his goons to push Marlena out of the same window she sent Kristen (Eileen Davidson) flying through.

Melanie (Molly Burnett) will also become concerned about a situation she’s facing. Theresa (Jen Lilley) has made it clear that her baby is her top priority, but getting back Brady (Eric Martsolf) is near the top of her list as well. Melanie will start to worry that Theresa will try to push her out of the picture so she can have Brady all to herself. It seems Brady’s life is going to get even more complicated thanks to Theresa.

Other “Days of Our Lives” spoilers hint that Abigail (Kate Mansi) will reach out to Chad (Billy Flynn). Jennifer (Melissa Reeves) informed Abigail that Kristen was dead and she’ll naturally want to see if she can help Chad deal with the loss. However, it looks like Abigail will do much more than offer her condolences. The pair will share a passionate moment as Chad struggles to work through his grief. It’s clear that Abigail is finding it difficult to resist her ex. DOOL spoilers for next week indicate that an argument with Ben (Robert Scott Wilson) will have Abigail questioning her relationship. Stick with the NBC soap to see if Abigail will decide that her heart belongs to Chad.

So “Days” fans, do you think JJ can get Eve to back off? Can Marlena keep her cool in the midst of danger? Could Theresa cause Melanie and Brady to call it quits? Will Abigail and Chad’s passionate moment lead them to make some updates to their relationship? Let us know what you think in the comments below and don’t forget to check CDL tomorrow for the latest “Days of Our Lives” spoilers, rumors, updates and news.

Here is the DOOL video preview for the May 11-15 Days of Our Lives episodes!