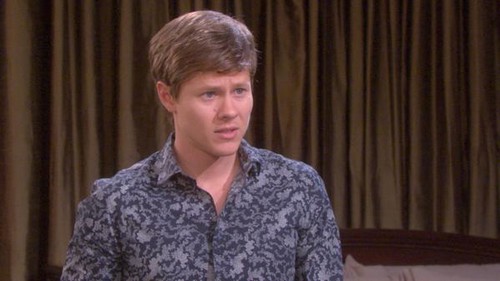 After weeks of buildup, some big secrets are finally going to be revealed in Salem. The latest “Days of Our Lives” spoilers indicate that Paul (Christopher Sean) will make a startling confession about his love life on an upcoming episode. It seems he’ll tell Sonny (Freddie Smith) that he’s met someone new, but it’s doubtful Will’s (Guy Wilson) name will come up just yet. Still, the news could lay the foundation for the realization we’ve all been waiting for. Sonny will put the pieces together eventually and when he does, there are sure to be some tense moments. “Days” is at its best when sparks fly and tempers flare. Keep watching the NBC soap to learn how Paul’s confession will set everything in motion.

DOOL fans will see another secret begin to unravel in the near future. “Days of Our Lives” spoilers hint that JJ (Casey Moss) will reveal something else to Paige (True O’Brien) about his affair. Paige seems determined to get to the bottom of his cheating and his new admission could be a big step toward the truth. It also appears she’ll turn to a surprising source for advice: her aunt Theresa (Jen Lilley). Will her suggestion help Paige discover that her own mother was JJ’s mistress?

Theresa’s not exactly known being helpful, but it probably won’t matter in the end. Since JJ can’t seem to keep his mouth shut or his fly zipped, you can bet this storyline will have a fiery finale. While some DOOL viewers have scoffed at Eve (Kassie DePaiva) and JJ’s hookups, everyone will want to pass the popcorn for the fallout of their uncontrolled passions. Stay tuned to “Days of Our Lives” in the coming weeks to watch Paige find out what’s been going on.

So “Days” fans, what do you think about all these impending revelations in Salem? Could Paul drop Will’s name at some point in the conversation or will Sonny have to figure things out on his own? What about Paige and JJ’s saga? Could Theresa’s advice help Paige learn what he’s been up to? Are you excited to see Paige’s meltdown when she learns the identity of JJ’s mystery lover? Let us know what you think in the comments below and don’t forget to stop by CDL tomorrow for more “Days of Our Lives” spoilers and news.