BY Heather Hughes on May 16, 2015 | Comments: 2 comments
Related : Days of Our Lives, Soap Opera, Spoiler, Television 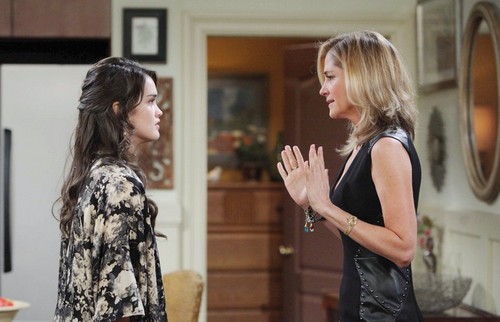 “Days of Our Lives” spoilers for Monday, May 18, tease that JJ (Casey Moss) will try to get Eve (Kassie DePaiva) to butt out of his life for good. JJ knows that Eve was involved in setting him up with drugs and he’s about to stage a setup of his own. We don’t know for sure what JJ has planned, but it looks like it’ll be a waste of his time. Later this week, Paige (True O’Brien) will get updates on JJ’s affair with Eve, which means it doesn’t really matter what sneaky scheme JJ comes up with.

A chat with Cole (Riley Bodenstab) could prove very enlightening for Paige. “Days of Our Lives” spoilers indicate that Paige will confront Cole about making JJ look like a drug dealer. Eve has made it clear that Cole shouldn’t tell anyone about their plan, but we all know he won’t hesitate to throw Eve under the bus if he has to. If Cole’s going down, Eve’s going down with him. It sounds like Cole might tip off Paige that Eve has been plotting against JJ. Stick with DOOL to see how much Cole will admit.

Meanwhile, Nicole (Arianne Zucker) will put her thinking cap on and try to figure out how the elephant statue ties in with Xander (Paul Telfer). Nicole knew something was up when she saw Serena (Melissa Archer) with two elephants. After Nicole saw a picture of one in Xander’s hotel room, her suspicions were confirmed. Now Nicole just has to learn why Xander and Serena would be so concerned with some cheap trinkets from their time in Africa. “Days” viewers can rest assured that Nicole won’t give up until she makes Eric (Greg Vaughan) realize that Serena’s been playing him. 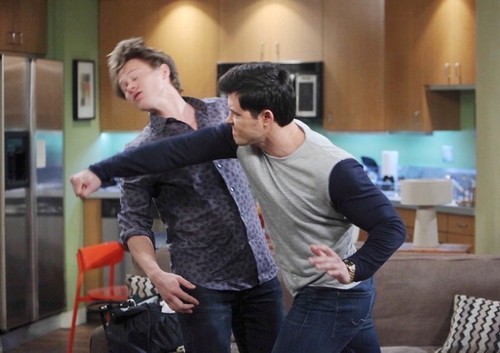 Other “Days of Our Lives” spoilers hint that Will (Guy Wilson) is in for a big shock when he returns from Poplar Bluff. DOOL rumors say that Will could walk in on Paul (Christopher Sean) and Sonny (Freddie Smith) sharing a warm moment. We all know how jealous Will is of Paul and his previous relationship with Sonny. Will certainly won’t like the fact that Paul has been hanging out in his apartment and spending time with Arianna (Harper and Sydnee Udell). Things should get pretty heated as Will confronts Paul about it. When Paul gets insulted, he won’t be able to resist throwing a punch or two. Stay tuned to the NBC soap to see the pair come to blows.

So “Days” fans, what do you think about the news that Paige will soon find out about Eve and JJ’s affair? And when we say soon we mean Tuesday, May 19! When will Nicole realize that one of the elephants was used to smuggle diamonds? Are you excited to see Will and Paul duke it out? Let us know what you think in the comments below and don’t forget to check CDL tomorrow for the latest “Days of Our Lives” spoilers, rumors, updates and news.

Watch Days of Our Lives video You Tube preview and spoilers for Monday and Tuesday, May 18 and 19, 2015