BY Heather Hughes on May 7, 2015 | Comments: one comment
Related : Days of Our Lives, Soap Opera, Spoiler, Television 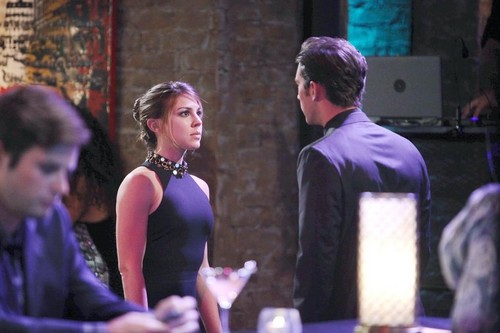 “Days of Our Lives” spoilers for Wednesday, May 6, tease that Paul (Christopher Sean) will think about coming back to Salem. However, Paul will decide to clear the idea with Sonny (Freddie Smith) first. It’s obvious that Paul still has feelings for his ex, but he doesn’t want to get in the way of Sonny’s current relationship. However, Justin’s (Wally Kurth) chat has Paul wondering if Sonny’s true happiness lies with him rather than Will (Guy Wilson).

Speaking of Justin, Adrienne (Judi Evans) will be shocked that he’s been interfering in Sonny’s love life. Justin hasn’t even been around to work on his own marriage, but he still found time to stick his nose in Sonny’s. Adrienne seems to think that Will and Sonny need to sort out their problems on their own. Justin’s heart is in the right place, but he might be getting a little too involved. In the end, Sonny’s decision should be his and his alone.

Meanwhile, Clyde (James Read) will have a sudden change of heart about being the subject of Will’s article. “Days of Our Lives” spoilers hint that Clyde will want the story written, but it’ll have to be on his terms. DOOL fans know that Will can be pretty stubborn and he’ll undoubtedly try to fight Clyde on this. Clyde will make sure that Will knows what’s at stake. If Will doesn’t do exactly as he’s told, it could mean bad news for Will and his family. Will can’t risk putting Sonny and Arianna (Harper and Sydnee Udell) in harm’s way. It sounds like this article will move forward however Clyde wants it to. Stick with “Days” to see if Clyde will force Will to make some updates to his plan.

Other “Days of Our Lives” spoilers indicate that Lucas (Bryan Dattilo) will be surprised when someone offers him a job. We don’t know for sure where the offer will come from, but all the signs seem to point to Stefano. It’s possible that Lucas could soon be working at DiMera Enterprises. DOOL rumors say that Lucas may end up using his new position to take Kate (Lauren Koslow) down. It seems Kate will regret getting Lucas fired at Mad World. Kate ruined her relationship with her son and now she might be looking at a destroyed career.

So “Days” fans, what do you think about Paul’s upcoming return to Salem? Will Sonny be OK with it? Will Adrienne blast Justin for trying to push Paul and Sonny together? Can Clyde convince Will to put a new spin on the article? Will Stefano be behind the new job offer for Lucas? Let us know what you think in the comments below and don’t forget to check CDL tomorrow for the latest “Days of Our Lives” spoilers, rumors, updates and news.