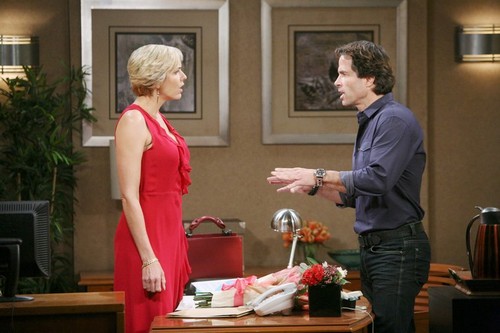 “Days of Our Lives” spoilers for Friday, July 3, reveal that Daniel (Shawn Christian) will decide it’s time to take the next step in his relationship. After nearly losing Nicole (Arianne Zucker), Daniel realized he didn’t want to live without her. Dr. Dan will ask Nicole to marry him and it looks like she’ll accept. However, a proposal from Daniel won’t make Nicole’s feelings for Eric (Greg Vaughan) go away. Getting engaged will likely make this mess even more complicated.

Of course, Eric might have a thing or two to say about the idea of Nicole marrying Daniel. DOOL spoilers tease that Eric will consider telling Daniel what happened the night they were trapped at the news station. Daniel deserves to know if Nicole is in love with another man. On the other hand, people might say anything when death is potentially moments away. Maybe Eric will start to wonder if Nicole’s declaration of love had more to do with the situation than her actual feelings. After all, if Nicole thought she was going to die, there was no point in hurting Eric by shutting him down.

Nevertheless, both Nicole and Eric’s confessions seemed genuine. “Days of Our Lives” rumors hint that Nicole will eventually realize she can’t continue to deny her feelings. Perhaps Nicole will finally figure out that Eric is her true love. If that’s the case, Nicole will have to find a way to break it to Daniel. On the bright side, Daniel will be able to say “I told you so.” Dr. Dan has always suspected Nicole wasn’t over Eric. Stick with “Days” to find out if Daniel will lose his new fiancé.

Other DOOL spoilers indicate that Sonny (Freddie Smith) will make a big decision about his marriage. Sonny’s chat with Paul (Christopher Sean) has given him a new perspective. Sonny certainly isn’t ready to forgive and forget, but he’s starting to understand where Will (Guy Wilson) is coming from. Will ended up marrying his first boyfriend and he never got any wild fantasies out of his system. That’s a pretty lame excuse, but it is what it is.

Still, Sonny’s sudden shift in thinking doesn’t mean things will work out. We have to remember that Sonny will be leaving Salem in just a few short weeks. Will Sonny decide he just doesn’t have the patience to wait for Will to grow up? Stay tuned to “Days of Our Lives” for updates on Will and Sonny’s future.

So “Days” fans, what do you think about Daniel’s proposal for Nicole? Will Eric tell Daniel about Nicole’s true feelings? Will Sonny and Will keep working on their marriage or call it quits? Let us know what you think in the comments below and don’t forget to check CDL tomorrow for the latest “Days of Our Lives” spoilers, rumors, updates and news.