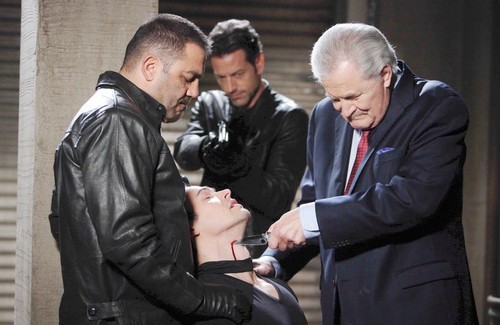 “Days of Our Lives” spoilers for Wednesday, June 24, reveal that Chad (Billy Flynn) will try to cope with the pain of pushing Abigail (Kate Mansi) away. Zoe (Miranda Mayo) will show up at the mansion and Chad will turn on the charm. Before you know it, Chad and Zoe will be locking lips. Obviously, a steamy kiss with Zoe won’t make Chad forget how much he cares about Abigail. It sounds like Zoe will just be a passing fling.

Meanwhile, Ben (Robert Scott Wilson) will stew about what he recently overheard. Ben got updates on Abigail’s affair with Chad and he’s absolutely furious. However, Ben may be willing to give Abigail another chance if she’ll confess her transgressions. DOOL spoilers tease that Ben will give Abigail the opportunity to admit to cheating on him. Abigail will likely try to cover her tracks since she doesn’t know she’s been caught. Nevertheless, the truth will undoubtedly come out and this troubled couple will have to do some soul-searching.

Other “Days of Our Lives” spoilers indicate that Daniel (Shawn Christian) will urge Nicole (Arianne Zucker) to hold on as she lingers between life and death. Eric (Greg Vaughan) will be in pretty bad shape as well. Nicole and Eric will be taken to the hospital for treatment right away. Dr. Dan is finally starting to realize how much Nicole really means to him. Unfortunately for Daniel, Eric just declared that Nicole was the great love of his life. It looks like Nicole will have to weigh her options carefully now that she has two men vying for her attention. Of course, Nicole’s primary focus at the moment will be recovering from the nightmare Xander (Paul Telfer) has put her through.

Speaking of Xander, it seems he’ll soon regret his villainous actions. Looking ahead to Thursday’s episode, Victor (John Aniston) and some of his minions will be on a mission to make Xander pay for his crimes. “Days” spoilers say that while the lackeys hold Xander at gunpoint, Victor will slit his throat. DOOL rumors hint that Xander should be sticking around until late August, which means he could escape. Then again, maybe Victor will have a change of heart. Victor might decide that killing Xander wouldn’t be worth the potential consequences. Will Victor hand Xander over to the police instead? Stay tuned to “Days of Our Lives” to see if Xander will make it out of Salem alive.

So “Days” fans, what do you think about the news that Chad will share a passionate kiss with Zoe? Can Ben get past Abigail’s infidelity? Will Daniel and Nicole get back on track? Will Xander end up in jail or will he try to make a run for it? Let us know what you think in the comments below and don’t forget to check CDL tomorrow for the latest “Days of Our Lives” spoilers, rumors, updates and news.