‘Days of Our Lives’ Spoilers: Will Pleads His Case to Sonny – Hope’s Painful Memories of Son’s Death Come Rushing Back 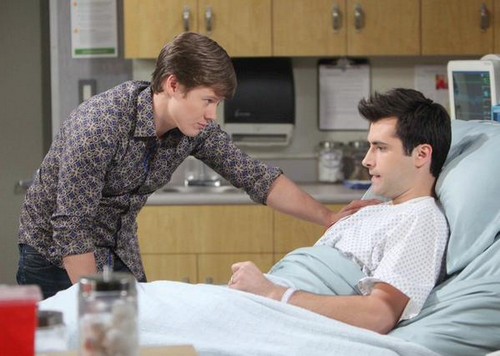 “Days of Our Lives” spoilers reveal that on Wednesday, February 25, Will (Guy Wilson) and Sonny (Freddie Smith) are set to have a big discussion about Will’s affair. Will has definitely expressed regret for sleeping with Sonny’s ex behind his back, but now he’ll likely go into full-on grovel mode. However, DOOL viewers know that Sonny’s been angrier than he’s ever been. No one would blame him if he shut Will out and refused to listen to his excuses.

Still, deep down Sonny is probably the nicest guy in Salem. If anyone could forgive such a low blow, it’s him. Will Sonny accept Will’s apology and try to make it work or will they soon find themselves filing for a divorce? We’ll have to wait and see, but Will’s going to do his best to fight for a second chance. Check out the February 25 episode of “Days” to find out if Sonny will be in a forgiving mood.

Other “Days of Our Lives” spoilers hint that Hope (Kristian Alfonso) will have her own problems to deal with on Wednesday, February 25. Aiden (Daniel Cosgrove) recently confessed that his son accidentally killed Meredith (Julie Tolivar) and Hope can see that the burden of keeping his secret has taken a toll. “Days of Our Lives” spoilers indicate that she’ll recall a painful memory of her own as she tries to comfort him.

We don’t know for sure what she’ll reminisce about, but it’s possible Hope could talk about the death of her son several years ago. After all, Bo’s (Peter Reckell) daughter was the one responsible for the hit and run. Like Aiden, her ex tried to hide that secret to protect his family. Perhaps Hope and Aiden will bond over their heartbreaking story swapping. Stay tuned to DOOL to see if all these revelations bring them closer.

So “Days” fans, what do you think about Will’s begging session on the February 25 episode? Will it be enough to convince Sonny to give their marriage another shot or is it all just too little too late? What about Hope’s painful recollection? What will she tell Aiden and how will he react? Will these scenes show us a couple that’s growing closer? Let us know what you think in the comments below and don’t forget to check CDL tomorrow for the latest “Days of Our Lives” spoilers and news.