Days of Our Lives (DOOL) Spoilers: James Read’s Final Airdate October 20 – Clyde Ends Up Dead or Goes On the Run? 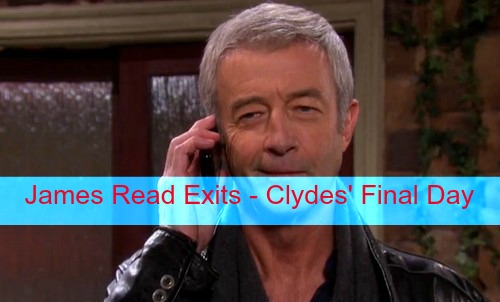 “Days of Our Lives” spoilers tease that James Read’s last airdate as Clyde will be on Tuesday, October 20. When we last saw Clyde, he had been arrested and was being extradited to Florida on murder charges. Aiden’s (Daniel Cosgrove) evidence sealed the deal. However, it appears Clyde might get out on bail. Knowing Clyde, he might’ve even paid off a guard to help him escape.

Whatever the case, Ben (Robert Scott Wilson) will have a chat with his old man on Tuesday. The pressure has been mounting on our necktie killer. Ben is going to blow if he doesn’t tell someone his secret soon. Fortunately, Clyde will serve as the perfect confidant.

DOOL fans know that Clyde has done his fair share of killing. When there’s a problem, Clyde eliminates it without hesitation. Clyde should have no qualms about his son’s actions. “Days of Our Lives” spoilers say Clyde will let Ben know that he’s got his back.

Of course, Clyde may not be able to provide support for long. As we just mentioned, this will be Clyde’s last day. Now the question becomes: how will Clyde make his exit? We’ve seen Clyde cause nothing but trouble since he first showed up in town. Clyde has proven himself as a viable villain in Salem, especially under the new writing team.

Perhaps Clyde will simply go on the run so they can leave their options open. James Read is an excellent actor with an extensive body of work. “Days” producers might want to bring Clyde back at a later date if Read’s on board with the idea. Sometimes it’s fun for viewers to wonder if a villain could return someday for revenge.

Then again, nothing would be more satisfying than to watch Clyde bite the dust. Nearly everyone would love to see Clyde get what he has coming to him. Clyde has plenty of enemies that might take justice into their own hands. Stefano (Joseph Mascolo), Andre (Thaao Penghlis), Victor (John Aniston), Aiden and many others would be thrilled to have the opportunity to take Clyde out.

There’s even a slim chance that Ben could kill Clyde if he decides he doesn’t trust him. Ben is completely unhinged and he’s not thinking rationally. Like his father, Ben chooses to get rid of anyone that stands in his way. Clyde could pry the confession out of Ben and end up dead if he doesn’t play his cards right. Still, Clyde seems firmly in Ben’s corner.

Maybe both of the Weston men will find themselves in the slammer by the time it’s all said and done. DOOL rumors hint that the walls are about to close in on Ben. Stick with “Days of Our Lives” for updates on the dark path Ben’s headed down.

So “Days” fans, what do you think about the news that Clyde will exit the NBC soap on Tuesday? Will Clyde go on the run or be killed by one of his many enemies? Will you miss Clyde or are you glad he’s moving on? Let us know what you think in the comments below and don’t forget to check CDL often for the latest “Days of Our Lives” spoilers, rumors, updates and news.