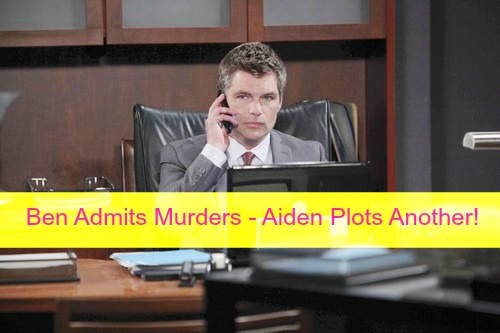 “Days of Our Lives” spoilers for Tuesday, October 20, promise an episode of DOOL in which the ghosts of murders past meet the spirit of murder future! Lani (Sal Stowers) will decide she wants to know a little more about Abe (James Reynolds). Lani already did some digging into Abe’s past, but it looks like she wants to get information straight from the source. Abe will probably be flattered that Lani seems so interested in his life, but he’ll quickly grow suspicious.

Next week on DOOL, Abe will make a startling discovery on Lani’s computer. It appears Abe will be onto Lani’s scheme soon enough. “Days” rumors suggest that Abe may be Lani’s dad. Perhaps we’ll see them connect as father and daughter down the road.

Meanwhile, Andre (Thaao Penghlis) and Stefano (Joseph Mascolo) will urge Aiden (Daniel Cosgrove) to make a bold move. Aiden has been considering the idea of killing Hope (Kristian Alfonso) for her money, but he’s not sure he can really go through with it. Since Aiden’s having doubts, the DiMeras will try to make him understand what he stands to gain.

“Days of Our Lives” spoilers say Andre will drop a few hints about the hefty life insurance policy Hope has. Even if Aiden doesn’t get enough money to cover all his debt, Stefano and Andre would be more than willing to let bygones be bygones. After all, this would greatly benefit them as well.

If Aiden poses as the necktie killer when he murders Hope, Chad (Billy Flynn) would be in the clear. It sounds like the perfect plan, but something’s bound to go wrong. It just wouldn’t be a soap if everything went off without a hitch. In fact, Aiden’s deadly mission could cost him his own life instead.

Tuesday’s episode of DOOL will also mark James Read’s last airdate as Clyde. It’s important for Clyde to make one last appearance to give his son a bit of reassurance. “Days of Our Lives” spoilers reveal that Ben (Robert Scott Wilson) will confess that he’s responsible for the recent murders in Salem.

Of course, Clyde won’t pass any judgment. Clyde doesn’t hesitate to kill people that get in his way. As sick as it is, Clyde will likely be proud of Ben on some level. The Westons are bad news and they always will be. Stick with the NBC soap for updates on how long they can keep Ben’s killing spree under wraps.

So “Days” fans, what do you think about Lani’s attempt to snoop into Abe’s background? Will Andre and Stefano convince Aiden to go through with his plot to kill Hope? Will Clyde help Ben keep his shocking secret? Let us know what you think in the comments below and don’t forget to check CDL often for the latest “Days of Our Lives” spoilers, rumors, updates and news.