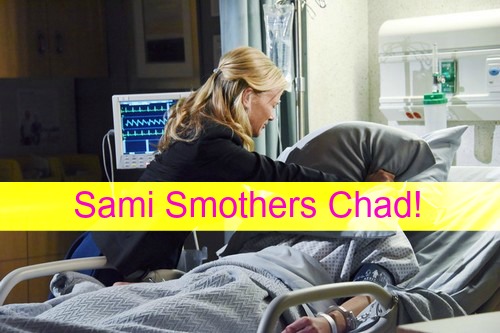 “Days of Our Lives” spoilers tease that Will’s (Guy Wilson) murder is going to shake things up in Salem the week, October 12 – October 16. Sami (Alison Sweeney) will return to town and immediately take the law into her own hands. While Eve (Kassie DePaiva) may have been full of sorrow after Paige’s (True O’Brien) death, it looks like Sami will be filled with rage. DOOL spoilers say Sami will try to commit another murder to avenge her son’s death – and who better to kill than Chad!

While it’s not 100% clear who Sami will blame, it appears the police will find more evidence that connects Chad (Billy Flynn) to the crimes. In any case DOOL photos and promo video indicate that Sami attempts to smother an injured Chad – whether Sami stops on her own before killing an innocent Chad or is stopped by another we don’t yet know.

It should be interesting to see who stands by Chad through all of this. “Days of Our Lives” spoilers indicate that Marlena (Deidre Hall) and Rafe (Galen Gering) will maintain that Chad is innocent, but many others won’t be so sure. Abigail (Kate Mansi) may even start to wonder if she’s supporting a guilty man, but deep down she knows Chad isn’t capable of these brutal murders. In fact, Chad considered Will a friend and he was grateful for his help when he tried to win back Abigail.

It doesn’t make sense that Chad would kill his business partner’s husband, but nothing’s ever going to make sense as long as Ben (Robert Scott Wilson) keeps setting Chad up. Fortunately, Chad will have a major realization that could lead him to the truth. “Days” spoilers reveal that Chad will believe he knows who framed him for the killings.

The question is: will Chad’s guess be correct? After all, Chad still thinks Clyde (James Read) was behind everything at this point. Chad’s next theory may miss the mark as well. However, there’s a chance that Chad could be onto Ben’s scheme. Either way, Ben is bound to slip up eventually.

It sounds like Ben will feel the walls closing in. DOOL rumors hint that Ben may decide to kidnap Abigail when he reaches the end of his rope. That might make for a soapy November sweeps storyline. At the very least, we know Abigail’s about to find out that her doting fiancé is actually a possessive lunatic. Things will soon grow dark and dire for this once happy couple. Stick with “Days of Our Lives” for updates on their rocky romance.

So “Days” fans, what do you think about the news that Sami will be willing to kill for justice? Will Sami ever be able to get over such a horrible loss? Will Chad figure out who’s been pinning the murders on him? Is Ben about to take desperate action? Let us know what you think in the comments below and don’t forget to check CDL often for the latest “Days of Our Lives” spoilers, rumors, updates and news.