Days of Our Lives (DOOL) Spoilers: Sami Realizes EJ May Be Alive, Uncovers Mystery – Will James Scott Make an Appearance? 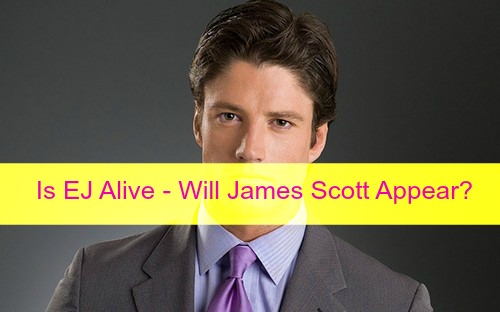 “Days of Our Lives” spoilers reveal that Sami (Alison Sweeney) will find herself feeling numb in the days after Will’s (Guy Wilson) murder. DOOL viewers know that Sami has been living in Hollywood, but it seems she’ll get the news while she’s making a previously scheduled trip home. When Sami shows up in Salem, she’ll remain mostly calm, cool and collected as she makes preparations for Will’s funeral. However, after keeping her emotions inside for a brief period, the reality of it all will start to set it.

Sami will visit Will’s apartment, possibly to collect some of his belongings. Sami may want to keep pictures and other mementos as she clings to the memories of her son. When Sami sees the outline of Will’s body as part of the crime scene investigation, she’ll finally let go of all the pain and anger she’s been holding in.

“Days of Our Lives” spoilers say Sami will have a meltdown shortly before reading about Chad’s (Billy Flynn) suspected involvement in Will’s murder. Like Justin (Wally Kurth) and many others in town, Sami will be convinced of Chad’s guilt and she’ll want to make him pay.

Fresh off a brutal fight with Ben (Robert Scott Wilson), Chad will be in a coma at the hospital. Sami will sneak in to finish Chad off by smothering him with a pillow. Fortunately, Marlena (Deidre Hall) is still giving Chad the benefit of the doubt and she’ll stop Sami from making a tragic mistake. Perhaps Sami will come to her senses and realize that killing Chad won’t solve anything.

Chad isn’t the real killer anyway, but it wouldn’t help Sami even if he were. The harsh truth is that Will is gone and committing another murder isn’t going to bring him back.

Sami will be a mess as she mourns her loss, but things could soon be looking up. “Days” spoilers tease that Sami will receive a Bible from a local priest that has an interesting verse highlighted. We don’t know for sure what the passage will be about, but it will likely bring EJ (James Scott) to Sami’s mind.

On top of that, Sami will learn that Marlena didn’t forward a letter that was supposedly written by EJ before his death. There will be something a little off about EJ’s letter that gets Sami’s wheels turning. Sami will keep gathering clues here and there before deciding to seek more info elsewhere.

“Days of Our Lives” rumors hint that Sami will find out crucial details and head back to Salem. Sami might demand answers from Stefano (Joseph Mascolo) and Andre (Thaao Penghlis) as well. We know Stefano was the one who ordered Kristen (Eileen Davidson) to inject EJ’s body with some type of preserving serum.

They undoubtedly stashed EJ somewhere and used good ol’ soap magic to bring him back to life. Could Sami eventually track EJ down and give viewers a happy “EJami” ending? It’s certainly a possibility.

After all, fans went nuts when James Scott and Alison Sweeney reunited briefly to film a scene for a young refugee. Maybe a similar scene will play out on the actual show. Since Sami isn’t sticking around permanently, having her reunite with EJ would be the perfect way to write her out again.

Besides, there are bound to be a few surprises in store as we approach into DOOL’s 50th anniversary. Stick with the NBC soap for updates on the potential reunion for this popular pairing.

So “Days” fans, what do you think about the idea of EJ making an appearance down the road? Could it be one of the studio’s big shockers for the 50th anniversary celebration? Would you like to see Sami and EJ live happily ever after? Let us know what you think in the comments below and don’t forget to check CDL often for the latest “Days of Our Lives” spoilers, rumors, updates and news.