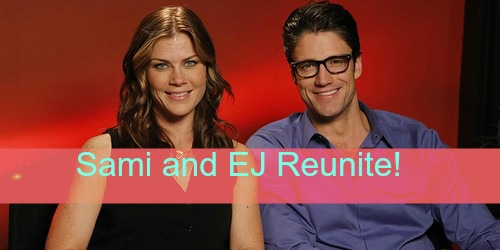 “Days of Our Lives” spoilers tease that Sami (Alison Sweeney) will soon make her way back to Salem, presumably for—gulp—Will’s (Guy Wilson) funeral. It looks like Sami won’t have the chance to see her son alive again, but at least she was able to reunite with her lost love. Well, sort of. DOOL viewers have been buzzing about a scene Alison Sweeney and James Scott (EJ) filmed for HBO’s “Last Week Tonight with John Oliver.”

To understand this reunion, you need to know about a recent piece by ABC News. The reporter documented the story of Noujain Mustafa, a wheelchair-bound refugee from a war-torn Syrian town. Mustafa traveled to the Serbian border in an effort to get to Germany.

While she was being interviewed, the reporter commented on Mustafa’s excellent use of English. Mustafa mentioned that she learned it from her favorite TV show. You guessed it: “Days of Our Lives.” Mustafa went on to say that she absolutely adored Sami and EJ. Naturally, it was a major blow when EJ was suddenly killed off.

John Oliver heard about Mustafa’s interview and his team made a few calls. On the latest episode of his show, Oliver gave a comical recap of Sami and EJ’s love saga before announcing he had a surprise just for Mustafa. They immediately rolled a clip that showed EJ returning from the dead to track down Sami.

The pair shared a steamy kiss and gave a shout-out to Mustafa as part of the dialogue. There’s no doubt that Mustafa was thrilled with the reunion. It’s safe to say most “EJami” shippers were delighted as well.
Sweeney spoke with Soap Opera Digest to share her feelings about the experience and explain why she wanted to give Mustafa this special gift. “I was incredibly moved by Noujain and her story,” Sweeney said. “And then when she revealed she was a ‘Days’ fan? And an EJami fan? Ha! It blew me away. I loved the idea of being able to give her a happily ever after for EJ and Sami.”

Scott was also excited to bring a smile to Mustafa’s face. Scott sent out a tweet thanking “Last Week Tonight” for letting them have “one last DiMera dance” and followed up with a tweet that said, “#ejamiaintover.” “Days” may not have given viewers a satisfying conclusion to Sami and EJ’s story, but thanks to Mustafa, we all got the fairytale ending we were hoping for. The rumors hint that we’ll see nothing but drama for Sami when she heads back to “Days of Our Lives” for a brief stint in October.

So “Days” fans, what do you think about the news that Sweeney and Scott reprised their roles for a great cause? Are you glad they gave Mustafa’s beloved characters some uplifting closure? Do you hope Sami and EJ will return to DOOL someday to make updates to their official storyline? Let us know what you think in the comments below and don’t forget to check CDL often for the latest “Days of Our Lives” spoilers, rumors, updates and news.