‘Days of Our Lives’ (DOOL) Spoilers: Killer’s Identity Revealed – Who Is The Strangler? 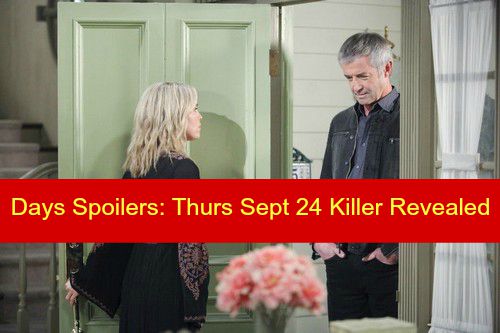 “Days of Our Lives” spoilers for Thursday, September 24, tease that the killer’s identity will be reveled – but will fans learn who the strangler, the real killer is this early in the plot? Marlena (Deidre Hall) will struggle to defend herself against her attacker. Marlena is putting up a good fight, but the assailant is clearly robust and desperate to take her out of the picture.

It appears Marlena is being targeted for helping Chad (Billy Flynn). Fortunately, “Days” spoilers say Chad will return to Marlena’s office just in time to stop the murder. The strangler will get away and Marlena won’t remember exactly what happened. Naturally, the finger will be pointed at Chad once again. The poor guy just can’t catch a break.

Of course, many DOOL viewers will be tuning in to get a glimpse of the killer. “Days of Our Lives” spoilers indicate that the murderer’s identity will be revealed. It’s tough to say who’s behind that mask. We’ve seen several suspects emerging lately. Ben (Robert Scott Wilson) reached his boiling point after he saw Chad and Abigail (Kate Mansi) together.

Could Ben want revenge on Chad for trying to steal his woman? It’s a possibility. Clyde (James Read) is an obvious suspect as well, but his time on DOOL should be wrapping up pretty soon. It seems more likely that Clyde will end up being a victim rather than the killer.

Speaking of Clyde, it looks like Jennifer (Melissa Reeves) could get on his bad side. “Days of Our Lives” spoilers hint that Jen will make a big mistake and it could put her in danger. That goes for JJ (Casey Moss), too. Perhaps Jennifer will say something that tips Clyde off about her conversation with JJ.

If Clyde figures out that JJ’s been spilling details to his mom, he might come after both of them. Clyde doesn’t mess around when it comes to his employees. Will Jennifer’s blunder prove costly? The rumors suggest that Jennifer and JJ will find themselves in a very risky situation. Stick with the NBC soap to see if Clyde will get updates on JJ’s betrayal.

So “Days” fans, what do you think about the news that Chad will show up and rescue Marlena? Which Salemite is the killer? When will Chad get off the hook? Will Jennifer accidentally clue Clyde in on something important? Let us know what you think in the comment below and don’t forget to check CDL often for the latest “Days of Our Lives” spoilers, rumors, updates and news.