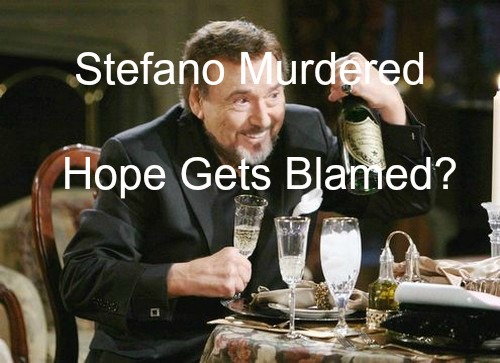 “Days of Our Lives” (DOOL) spoilers reveal that a shocking murder is about to cause quite a stir. We’ve seen plenty of deaths on DOOL lately, but this demise is going to be a biggie. Ken Corday, the executive producer of “Days,” previewed the gruesome killing in the latest issue of Soap Opera Digest.

Corday said, “A major character is murdered in cold blood. This will be the biggest thing in Salem and the ripple effects will be felt for many, many months.” DOOL viewers can expect this murder to occur sometime in 2016. It sounds like “Days of Our Lives” will continue the fantastic momentum they’ve built up recently.

Now that we know a murder is coming, we can start speculating about the victim’s identity. We’ve been hearing rumblings that Joseph Mascolo, who plays Stefano, may have been forced into retirement.

Stefano has been killed off many times during his years on the NBC soap, but he always seems to rise from the dead. Word has it that this could be Stefano’s last sendoff, but he may pop up from time to time as a ghost.

If Stefano is the character who bites the dust, we have to wonder who will do the deed. Based on future DOOL spoilers, it’s clear that Hope (Kristian Alfonso) and Stefano will have a huge confrontation.

Maybe Hope will find a connection between the DiMeras and Bo’s (Peter Reckell) kidnapping. That would certainly create intense conflict.

We also know that Andre (Thaao Penghlis) will soon come after Hope for revenge. Could Hope be blamed when Stefano gets killed? Hope’s already facing one murder charge and she could end up adding another.

The question is: will Hope truly be guilty? Perhaps Hope will be framed once again.

Kristian Alfonso signed a new contract and Hope promised Ciara (Vivian Jovanni) that she would be there for her. Hope probably isn’t headed to prison for any great length of time.

If Hope does land in the clinker, her stay will likely be short. Of course, Hope could kill Stefano and manage to get away with it.

Still, we shouldn’t assume that Hope is necessarily the person who might put the final nail in Stefano’s coffin. There’s been a lot of buzz about a new character named Deimos (Vincent Irizzary) with ties to the Kiriakis clan. Deimos will arrive in town with vengeance on his mind.

It’s possible that Deimos has vendettas against both Stefano and Victor (John Aniston). Who knows how Deimos has been wronged in the past? We may need to fear for Victor’s life, too.

It looks like we’ll just have to wait and see how all of this plays out. One thing’s for sure: 2016 is going to be epic! Stick with “Days of Our Lives” for updates on all the drama and mayhem.

So “Days” fans, what do you think about the news that a major character will be murdered? Will Stefano be the one who gets killed off? Who could be responsible for Stefano’s potential death?