‘Days of Our Lives’ (DOOL) Spoilers: Killer Attempts to Strangle Marlena After She Hypnotizes Chad to Recall Murders 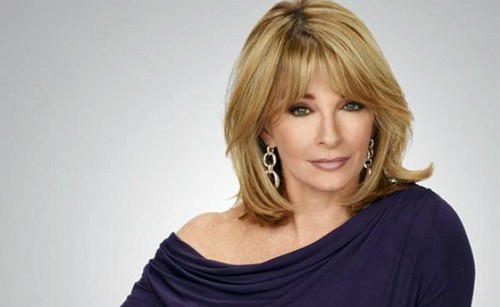 “Days of Our Lives” spoilers reveal that the walls will start closing in on Chad (Billy Flynn). There’s a killer on the loose in Salem and the evidence is beginning to pile up. Chad was immediately blamed for Serena’s (Melissa Archer) murder due to the argument they shared shortly before her demise. Of course, there were also some clues found near the body. The police spotted a cocktail napkin smeared with Chad’s blood and his key to the gate of the DiMera mansion.

To make matters worse, Chad was seen grabbing Paige (True O’Brien) and shouting at her right before she was killed. When you tack on the fact that both victims were strangled with a necktie, Chad certainly looks like the guilty party. Luckily, Chad still has a handful of people in his corner. Despite all the proof, Rafe (Galen Gering) seems to think Chad is innocent. Maybe it’s just cop intuition, but Rafe can’t believe that Chad is capable of murder. Abigail (Kate Mansi) isn’t buying Chad as a killer either.

Another Salem resident will soon join the list of Chad supporters. DOOL spoilers say Marlena (Deidre Hall) will offer her services and try her best to clear Chad’s name. Chad helped talk Stefano (Joseph Mascolo) out of killing Marlena and she returned the favor by giving him advice on his love life. Many “Days” viewers have been pleased to see these two develop a deep connection and that bond may grow even stronger.

“Days of Our Lives” spoilers tease that Marlena will hypnotize Chad in an effort to get to the bottom of what really happened. Chad had a horrible hangover the morning after his encounter with Serena, which was to be expected after downing that much scotch. Nevertheless, this seemed like more than the typical aftermath of a drinking binge. Chad was likely drugged and taken to the Salem Inn so he wouldn’t have an alibi or any recollection of what went down. If Marlena can help Chad access that memory, it would at least be a step in the right direction.

Based on DOOL’s 50th anniversary promo, we can confirm that there will eventually be an attempt on Marlena’s life. Perhaps the killer will get nervous that Chad recalled something important. He or she might fear that Marlena knows too much. Fortunately, Deidre Hall still appears to be portraying her character at this point. Hall has been in several photos on set and she’s on contract as far as we know. That means Marlena fans can probably breathe a sigh of relief and have faith that she’ll pull through.

However, a few rumors hint that Will (Guy Wilson) could be the one who saves Marlena only to end up getting strangled himself. It’s not clear how much longer Will’s going to be in Salem, but we do know that a shocking event will bring Sami (Alison Sweeney) back into the picture. Will Marlena’s hypnotism lead to another death? Stick with “Days of Our Lives” for updates on the unravelling murder mystery.

So “Days” fans, what do you think about the news that Marlena will hypnotize Chad? Will Chad remember any crucial details about the killer? Will Chad’s regained memory be what leads to the attack on Marlena? Let us know what you think in the comments below and don’t forget to check CDL often for the latest “Days of Our Lives” spoilers, rumors, updates and news.