Days of Our Lives (DOOL) Spoilers: Bo Killed Off – Hope Forced to Say Goodbye One Last Time as Bo Dies 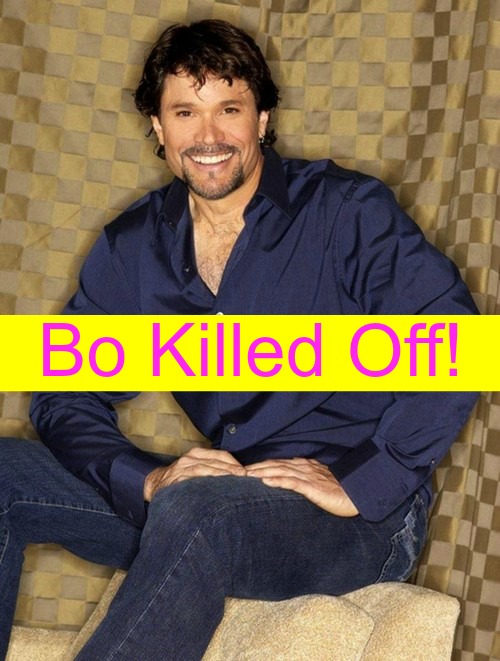 “Days of Our Lives” spoilers tease that even more heartbreak is in Hope’s (Kristian Alfonso) future. Hope already lost one love when Aiden (Daniel Cosgrove) duped her and ended up getting killed as a result of his murder plot.

However, the silver lining was that Bo (Peter Reckell) managed to fight his way back into Hope’s life. Unfortunately, Bo won’t be able to stick around. We now have confirmation that Peter Reckell will be departing DOOL in the near future and his beloved character will be killed off.

Jason47’s “Days” website is reporting that an Australian magazine spilled the scoop. It seems Bo will be diagnosed with a disease, presumably one that’s linked to his time in captivity. Perhaps Bo was unable to receive a diagnosis in time or the harsh treatment he received brought this illness on.

We’ve been seeing some signs of it with Bo’s dizziness and fainting spells. Bo likely attributed those symptoms to exhaustion at first, but several tests will verify that his condition is grave.

“Days of Our Lives” spoilers reveal that Bo will struggle to break the news to Hope. Bo just came back to “Fancy Face” and now she’ll have to say goodbye again. Bo will make love with Hope before he drops the bomb. Naturally, Hope will be inconsolable. Steve (Stephen Nichols) and Kayla (Mary Beth Evans) will be in the loop on this, too. Hope will lash out at them for keeping such a huge secret from her.

In Steve and Kayla’s defense, they probably didn’t think Hope could handle it after her ordeal with Aiden. Hope is definitely in a very fragile state. It should make things even worse once she learns Bo is dying. If there was ever a time for a depression storyline, this would be it.

It looks like Caroline (Peggy McCay) will also have trouble coping with this upsetting revelation. Caroline recently lost Will (Guy Wilson) and she’s about to lose Bo as well. Luckily, Caroline will have Victor (John Aniston) to lean on for support.

Nevertheless, there are tough times ahead for the Bradys. Hope will blame the DiMeras for most of her misfortune. DOOL rumors hint that Bo’s death will be the last straw that fully reignites the Brady and DiMera feud. Stick with “Days of Our Lives” for updates on the bitter battle.

So “Days” fans, what do you think about the news that Bo will die of a disease? Since Peter Reckell wasn’t willing to stay with the NBC soap, do you feel this is the best route for closure? Let us know what you think in the comments below and don’t forget to check CDL often for the latest “Days of Our Lives” spoilers, rumors, updates and news.