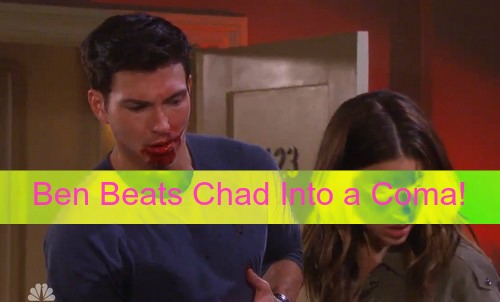 “Days of Our Lives” spoilers for Tuesday, October 13, tease that a major showdown is brewing. Chad (Billy Flynn) just figured out that Ben (Robert Scott Wilson) is the one responsible for setting him up and he’s not happy about it. Ben is completely unhinged and he’s willing to do anything to hang onto to Abigail (Kate Mansi).

Ben was even willing to murder his own best man to point the finger at Chad. While Will’s (Guy Wilson) death continues to make waves, Chad will be focused on stopping this monster. Unfortunately, it looks like Chad will be fighting a losing battle.

DOOL spoilers say Ben will beat Chad to a pulp once he’s faced with accusations. Chad will get in a few good blows, but he’ll be no match for someone with that level of strength and rage. Besides, Ben practically turns into “The Incredible Hulk” whenever he even hears Chad’s name. When Chad is up in Ben’s face, things are bound to get ugly. 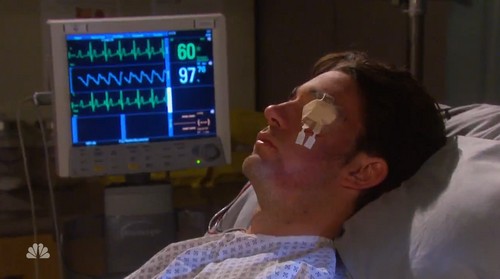 “Days of Our Lives” spoilers reveal that Abigail will eventually return home and intervene, but by then it’ll be too late. Chad will be taken to the hospital in critical condition. When Abigail learns that Ben has put Chad in a coma, she’ll realize that her fiancé is more dangerous than she thought.

Other “Days” spoilers indicate that Sami (Alison Sweeney) will be surprisingly calm about Will’s murder. In fact, Marlena (Deidre Hall) and Lucas (Bryan Dattilo) will be somewhat concerned when Sami holds in her emotions. It appears there hasn’t really been enough time for everything to sink in. Later this week, Sami’s sadness and anger will finally hit.

Sami will come after comatose Chad in an attempt to avenge her son’s death. Marlena will stop Sami’s irrational move and try to help her deal with her grief in a more reasonable way. Sami is going to need all the support she can get as she copes with such a terrible loss.

Meanwhile, Rafe (Galen Gering) and Hope (Kristian Alfonso) will find a couple more clues that lead them to Chad. This case still seems a little too neat for Rafe. All the evidence is just too convenient. However, everyone in Salem must be on edge. If the Salem PD doesn’t do something fast, people are going to panic.

Plus, Will’s family will undoubtedly put pressure on Rafe to make an arrest. Rafe will remain adamant that he’s got to get the right man. That means looking at this situation from every angle. DOOL rumors hint that Rafe may start to get suspicious of Ben after his brawl with Chad. Stick with “Days of Our Lives” for updates on Rafe’s investigation.

So “Days” fans, what do you think about the news that Ben and Chad will have a huge confrontation? Will this fight help Abigail see what Ben is truly capable of? Will Sami’s family help her manage her grief? Is Rafe about to suspect the real killer? Let us know what you think in the comments below and don’t forget to check CDL often for the latest “Days of Our Lives” spoilers, rumors, updates and news.