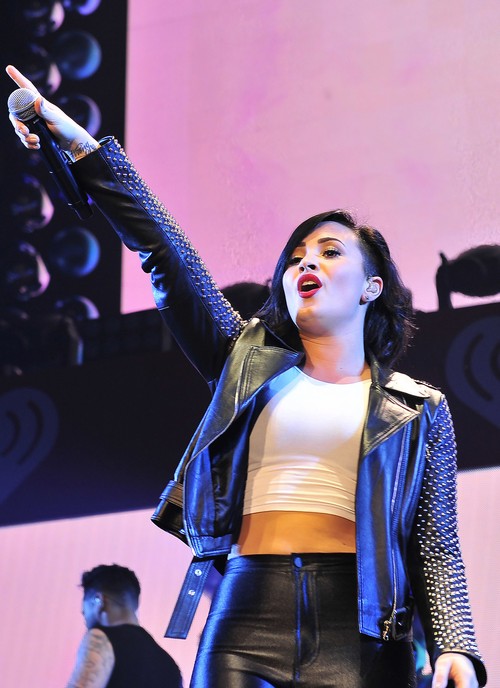 Demi Lovato had a crotch shot wardrobe malfunction that showed off more than her panties – it gave full view to her cellulite so we know it was an accident! Once upon a time, Demi Lovato was a complete mess. She was addicted to drugs, she partied all the time, and a wardrobe malfunction [or two or three] wasn’t out of the ordinary. However, she’s seemingly gotten her act together since then, making demure public appearances and generally staying out of the limelight for the wrong reasons. But alas, it seems like whenever she goes out with her boyfriend Wilmer Valderrama, there’s drama to be had.

Demi and Wilmer were attending a party hosted by Nick Jonas, and when Demi was sliding back into the car [which Wilmer was driving] after the party, she accidentally flashed the paparazzi her crotch and underwear.

Oops. Unfortunately for Demi Lovato, she’s still a big-name star and the paparazzi will always, always try to get pictures of any wardrobe malfunction possible. To this day, I’ll never understand how celebrities feel comfortable wearing short skirts or cleavage-baring tops, especially when out in Hollywood. But alas, Demi Lovato did wear a short skirt, and she ended up having a wardrobe malfunction.

Not only did Demi have a wardrobe malfunction, but people also managed to get a glimpse of the cellulite around her thighs and crotch. It wasn’t a big amount, by any means, but it should go some ways to proving that celebrities are human – like us – and have cellulite – like us.

What do you guys think about Demi Lovato accidentally flashing everyone her crotch and her underwear during a night out in Hollywood? Do you think there should be a law banning paparazzi from taking these kind of images of female celebrities? I mean, this wasn’t Demi’s fault, right? There are conspiracy theorists that claim that Demi could have orchestrated this wardrobe malfunction to get into the spotlight, but if that was the case, wouldn’t she have made sure that her cellulite wasn’t showing?