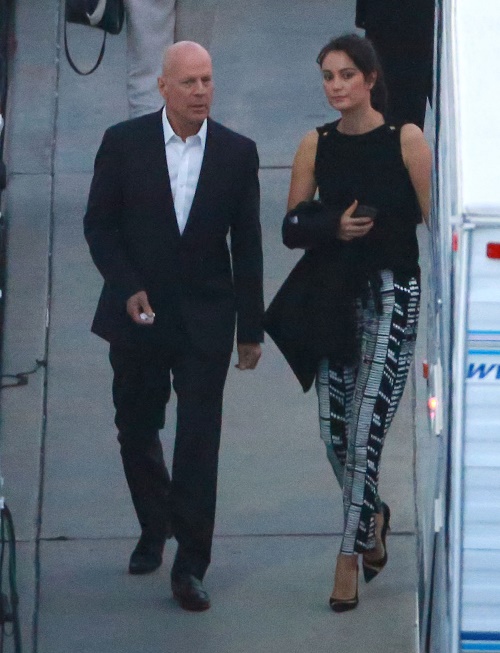 Demi Moore was banned from her ex-husband Bruce Willis’s 60th birthday party by his new wife Emma Heming. According to an all new report from GLOBE Magazine, Emma planned the fancy party at an upscale Manhattan restaurant for family and friends – and intentionally left Demi, the mother of his three daughters, off the guest list. Demi and Bruce divorced back in 1998 but have always been the best of friends and never had a bad thing to say about each other, but apparently Emma is tired of sharing her husband with his ex!

The April 13th edition of GLOBE Magazine reveals, “Demi was missing at the March 21st party and a source tells us that Bruce’s current wife Emma Hemling was the reason.” GLOBE’s insider goes on to explain, “Demi plainly makes Emma uncomfortable. Bruce could well of wanted Demi there. But, he’s not going to let her be a problem in his marriage.”

Ironically, Bruce Willis is not the only one of Demi’s ex that just can’t seem to shake her – she still is trying desperately to be a part of Ashton Kutcher’s life and has been practically stalking his new baby Wyatt. Considering Demi’s reputation and stage five clinger tendencies, we can’t even blame Emma for wanting to put some distance between her husband Bruce and his ex Demi. Their three daughters are all well into adulthood – there really is no reason for them to be in constant contact with each other. Then again, we all know how Demi gets down – and Emma shouldn’t be worried considering his ex has a thing for younger men and Bruce just turned 60!

Do you think that is was unfair of Bruce’s wife to ban Demi from his birthday party? Or is it time for Demi to let him move on with his new family? Would Demi ever hook up with Bruce again – or is Emma just paranoid? Let us know what you think in the comments below!