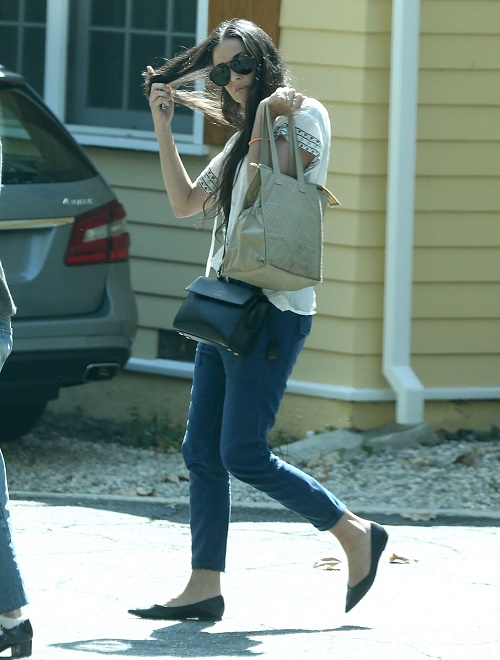 Did Demi Moore join the Dancing With The Stars season 21 cast? Earlier this year Demi’s daughter Rumer Willis competed on DWTS, and she and her partner Val Chmerkovskiy won the ABC dancing competition and took home the Mirror Ball Trophy. Of course, Rumer’s success had Demi salivating to outdo her daughter – whom she is always in competition with and trying to “one up.” Healthiest mother-daughter relationship ever…

The full Season 21 Dancing With The Stars cast is set to be unveiled on ABC’s Good Morning America on September 2nd, but rumors have been floating around for weeks and everyone has been speculating over what celebs may be competing. Rumer’s mom Demi Moore is at the top of the list of rumored cast members – for obvious reasons. Stealing her daughter’s title on national television is something Demi Moore would definitely do, not to mention she saw how much attention Rumer received while on the show, and we all know Demi can never turn down attention.

One DWTS cast member for the Fall 2015 season that has been officially confirmed by ABC is the late Steve Irwin’s daughter, 17-year-old Bindi Irwin. Bindi appeared on Good Morning America on Monday August 24 to discuss her new gig, and she joked about how scary the panel of DWTS judges is. Some other celebs who are rumored to be a part of the cast but have not yet bet confirmed are Amanda Bynes, Nick Carter, Alexa Vega, and Jodie Sweetin. The Dancing With The Stars producers were hounding Caitlyn Jenner (formerly known as Bruce) to appear on Season 21 – but she was too busy filming her own reality TV show, feuding with her ex-wife Kris, and just being a total diva.

So DWTS fans, are you as excited as we are for the Season 21 premiere? Do you think that Demi Moore will be competing? Will she be half as good as her daughter Rumer was? Let us know what you think in the comments below and don’t forget to check CDL for all of your Dancing With The Stars 2015 spoilers and cast news!