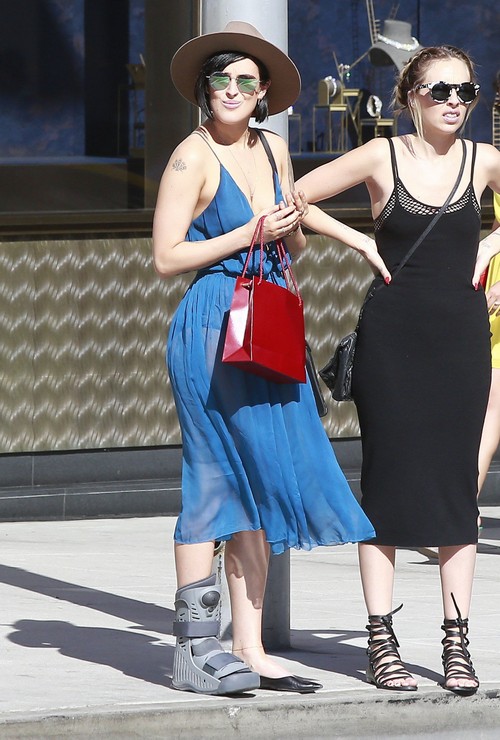 Rumer Willis has always been known as the most responsible of the three daughters born to Demi Moore and Bruce Willis, but it now appears she may be headed off the rails as well. The National Enquirer reports that Rumer is headed for a breakdown because she can’t take the stress of preparing for her Broadway debut in the musical Chicago in the iconic role of Roxie Hart.

Rumer had been trying to get her acting career off the ground for some time and often complained about trying to work in the shadow of her famous (and infamous) parents Bruce Willis and Demi Moore. Combine that the stress of essentially parenting her two younger siblings while Demi partied and you’ve got a recipe for stress that few young women could shoulder without trouble.

Rumer Willis watched her mother Demi Moore spin out of control after she and Ashton Kutcher split up amid cheating allegations aimed at the hot actor (who is now wed to Mila Kunis with whom he has a daughter). Demi spiraled out of control, and at her lowest point was hospitalized for huffing whip-its, a nitrous oxide stimulant. Demi later spent months in “spiritual rehab” aka addiction rehab at Cirque Lodge.

Demi’s antics also included running around with young men less than half her age. Sister Tallulah Willis spent time in rehab for drug and alcohol addiction. Tallulah Willis blamed her mother’s embarrassing behavior for a good bit of her problems. And sister Scout Willis is known for her exhibitionism, cavorting topless in daylight in the streets of NYC, writing online about taking drugs and having sex with strangers as well as blogging about suicide fantasies.

Being the straight one in that bunch of hot messes has to take its toll on Rumer Willis. Her recent appearance – and win – on Dancing with the Stars was intended to be a fresh start to establish herself as an entertainer apart from her famous parents. But her mother’s omnipresence at the show’s airings may have been more to get attention for herself. Demi can’t stay off social media – can’t stop posting selfies of her aging, emaciated frame in bikinis and desperately clinging to lost youth and relevance.

All of this has had a significant impact on Rumer who hoped to ride the wave of her DWTS win to Broadway. And now that she’s getting what she wanted at long last, Rumer is cracking up because she’s certain she’s going to fail. It’s one thing to take a week to memorize a single dance number, but a Broadway musical is much more rigorous and Rumer is struggling to keep up with the professionals performing with her. To make it worse, stress fractures kept her out of rehearsals for weeks.

London’s Daily Mail spoke to an insider at the show who said, “Everyone is panicking. Rumer was really overwhelmed with the complexity of the role and the amount of material she was supposed to retain in a short time. If her rehearsals were any indication of things to come, they’re not sure she’ll be ready for opening night.” The big question now is whether the thirsty celebspawn will even make it to her Broadway debut without cracking up completely.

On the plus side, if Rumer Willis does end up needed to take a rest for “exhaustion” the celebrity pseudonym for addiction/mental health issues, maybe she can get a volume discount on rehab since her mom and sister have already done stints at institutions to deal with their issues. Hmm. Maybe a Groupon?

Injured actress Rumer Willis and a friend out shopping at Cartier on her birthday in Beverly Hills, California on August 16, 2015. Rumer turned 27 today and decided to treat herself to some retail therapy. FameFlynet