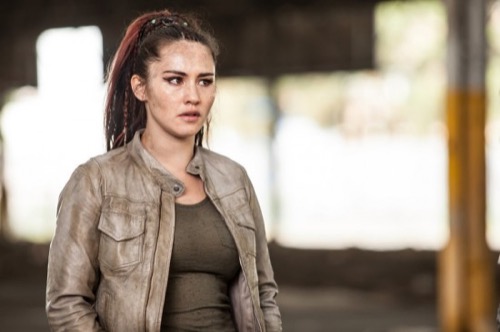 Syfy’s series Dominion continues with an all new Thursday August 20 season 2 episode 7 called, “Lay Thee Before Kings.” We’ve got your recap down below! On tonight’s episode, Alex (Christopher Egan) finds unexpected shelter to nurse a wounded Noma, with the New Delphi army hot on their trail.

On last week’s episode Alex attempted a dangerous eviction in an effort to save Vega from an impending attack; at the same time, Michael plotted their escape from New Delphi; and Claire desperately navigated the fallout of Civil War as Gates travels behind enemy lines to kill a broadcast that threatened peace in the city. Elsewhere, David procures his role in the rebellion following correspondence with an unexpected ally. Did you watch the last episode? If you missed it we have a full and detailed recap, right here for you.

On tonight’s episode per the Syfy synopsis “Alex finds unexpected shelter to nurse a wounded Noma, with the New Delphi army hot on their trail; at the same time, Michael and Gabriel attempt to escape their mutual captivity while revisiting a past that haunts them both; and Claire calls for a dangerous parlay as David puts a plan in motion to secure his legacy in Vega.”

Dominion airs at 9 PM on SYFY and we will be live blogging it with all the up-to-the-minute details. So make sure to come back to this spot and spend the evening with us! Make sure to refresh often to get the most current details and updates!

#Dominion begins in New Delphi with Michael and Gabriel chained up. Julian aka Lyrae comes in and calls them brothers. Julian says being a dyad has advantages they can’t imagine and says he can tap into human hatred which is almost incomprehensible. Michael scoffs at him and Julian calls him smug. Michael calls him a sadist. Julian monologues and reveals he plans to torture them and then take one of their bodies for his own.

Alex wakes at the farmhouse to find Noma gone and checks his arm where Julian burned him. There are eight balls on the property. A man is there and asks if he’s the chosen one and tells her to bring him East. Alex is there and tells her to come on. The man who spoke to her can burn up the eight balls with a gesture of his hand. Gabriel asks Michael if Julian can steal one of their bodies and says this is all because of Alex and Michael protecting him.

Michael reminds Gabriel he once watched over a chosen child. We see a flashback to Gabriel with a young boy walking back in ancient times. Gabriel mentors the child then he spots Michael in the small town. In Vega, Claire kisses Gates then her guard says they need her. The rebels have killed some of her people – her personal staff. Gates says they only have three weeks worth of food. Claire says she needs to make a deal with Zoe but without including David in the talk.

David sits with Zoe as she meets with some other people who are controlling the food towers. The power flickers and David says it’s a message from Claire. He passes something to one of the men. Junior comes to see the ailing Reisen and says he wants the amphora. Reisen refuses. Julian says he won’t use it to destroy Vega or he already would have. Julian asks why he came to New Delphi and who is Clementine. Reisen says it was his wife who was possessed.

He says he captured the angel who took her body and they became close. He says it was her idea to come there. Julian says Reisen still has life left in him yet. Gabriel thinks back to the young man he mentored – it was David. He tucked him to sleep then sat down with Michael. Michael tells him it’s time and that the army is coming. He tells Gabriel it’s time for his son to do his duty. Gabriel tells his “son” that was is coming and he must be brave.

Noma is in bad shape but Alex says he’ll find her the supplies they need – they go to a local store and creep inside. There’s an eight ball standing by a register saying beep beep like he’s scanning stuff. Another walks by muttering clean up on aisle three and sweeping. Noma says lower angels are like humans and have personalities. She says they all get obsessed with the lives they took. A greeter approaches them and offers help.

Alex says they’re not attacking and they should take what they need – he says to get a cart. Claire tells Gates she has a meet set up with Zoe but he doesn’t think it’s safe particularly when she says she’s taking Arika. Gates thinks Arika could be the rebel spy. Gabriel asks why bring up the boy now and Michael says it’s good to remember where they come from. We see Gabriel and the farmers face off against a large army. A giant man steps out of the army and asks who will fight him.

Gabriel tells David to be brave. The giant demands the king and says if no one will fight him they will kill them all and take their wives. David steps out of the crowd of farmers and the soldiers laugh. Michael is there beside him unseen to the others as David pulls a small stone out of his pocket and drops it. The giant runs at him sword out. David puts the stone in his sling and looks back at his “father” Gabriel. He slings it and stone goes through Goliath’s head and down he goes dead.

The farmers scream in victory and run to stand with Goliath then run at the army. The soldiers run. Gabriel smiles at his son. Noma and Alex shop and the whole thing is freaking out Noma. They go to check the back to see if there are more guns and spot a pile of bodies. David goes with Zoe to her meet with Claire who has Gates with her. Each has their security team search the other for weapons then they approach. Gates and David stay back.

Claire asks if she shot David’s hand and says next time to put a bullet in his head. Claire says she’s prepared to send soldiers across the trenches to reunite the city. Claire tells Zoe to reunify and they can work together as equals to find a solution. Zoe agrees but then Gates spots a sniper and warms them to get down. Each runs back to their own vehicle and speeds off. Claire was shot non-fatally it seems. Julian comes to check on Gabriel and Michael and scoffs at them.

Julian cranks up the device and Gabriel and Michael hold the pole together. David is furious that Pearson failed to kill Claire with the sniper. Turns out he arranged assassinations for David before. He tells Pearson to kill Claire if he wants the rest of the money. Alex and Noma head to a check out. They’re hoping to live to get out of the zombie Walmart and not end up with the other corpses in the back. They head to the register.

The guy scans their stuff and says beep beep beep. He asks if they found everything. The last item won’t “scan” and then the guy says beep and that it takes a few tries. He asks paper or plastic. Another employee locks the door and they surround them. Alex kills the cashier and asks to speak to a manager.

Gates gets Zoe back and doctors are waiting. Gates promises to find whoever did this. Arika says her doctors are on the way. They rush her into surgery. Gates tells Arika that Zoe didn’t set them up and Arika says it must have been David. He says no more peace talk. Julian brings in a woman and tells Reisen he brought back Clementine. Zoe asks Pearson that they could have had peace but for him – she saw David’s watch on his arm. Zoe has him beaten to death while she watches.

Claire is told that she lost her baby because of the blood loss. Michael and Gabriel are using the electricity to try and break their bonds despite the pain. Gabriel thinks back to looking for David who was swept away by the crowd. Michael reveals that King Saul had David killed – thrown from the palace balcony and Michael says he wasn’t fast enough to catch him. He says Saul put an imposter in his place – another child – and tells Gabriel he’s sorry.

Gabriel cries over the boy – didn’t know angels could have kids – guess he wasn’t his “son” but his actual son. Gabriel holds David and cries bitter tears then they bury the child later. Gabriel says the loss of David’s life is a stain on his soul and Michael says he must trust in Father’s plan but Gabriel says humans will destroy it. He says Father thinks too much of humans. Michael says time will heal him and they must not lose hope. Gabriel says no time will heal this. He pops his wings and flies away.

Gabriel tells Michael that Alex can’t survive without him. He says either the humans or angels will kill Alex. Gabriel is ready to sacrifice himself so that Michael can get away and save Alex. He tells him to protect Alex and bring their Father back. He kicks Michael’s chair back and takes the brunt of the electricity on him – Michael breaks his bonds and turns it off but Gabriel is down. Eight balls run in but Michael fights them off and kills them.

He breaks Gabriel’s bonds and hauls him out. Gabriel shoves him out the door and locks it – he says he can’t leave because he still has to kill Julian. Later, Julian finds Gabriel on the floor and says he’s not done with him – he tries to revive him. Gabriel thinks back to sneaking into King David’s palace where the king slept among a pile of women. He asks if David has children and rattles off their names, all eight of them. He says David was blessed with a large family.

He says he had a son long ago and an imposter took his place and tarnished that destiny. He tells the fake David all his children will die today and his name will die out. He shoves fake David out the window and pulls his sword to go kill the children. Alex binds Noma’s wounds but she says she doesn’t want to live like this – she says she’s not angel, not human – she’s nothing. Alex says he knows who she is even if she doesn’t. He says she’s Nomes.

He kisses her and says he doesn’t know the plan but there is one. He says she and Michael are part of it and so is he. He says they can figure it out together back in Vega. She kisses him again. More eight balls approach the store. One has a chain saw and starts to hack through the doors. Alex curses.