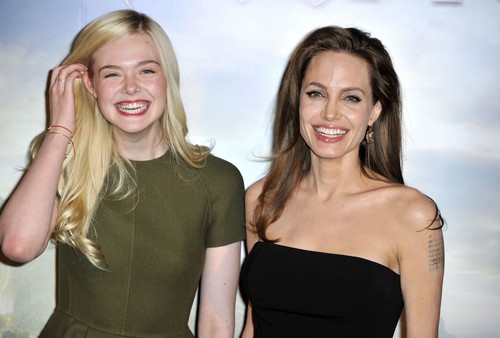 Disney star Elle Fanning is apparently not half as sweet as she pretends to be when the cameras are rolling. As a matter of fact, it looks like Dakota Fanning‘s little sister is a total diva – and swears like a sailor. Elle reportedly made a huge scene at a passport office, and onlookers were shocked by her horrible behavior and the profanity coming out of her mouth.

An eye witness at a passport office in Van Nuys, California had the “pleasure” of getting to see Elle Fanning’s diva antics first hand – and they dished about their experience in this week’s edition of OK! Magazine. The source explained, “Elle was dropping F-bombs, screaming ‘this is bullshit’ at the top of her lungs, and generally making a scene. Even her dad couldn’t control the raging starlet. He kept trying to calm her down, but he didn’t seem too shocked by her language.”

When you star in Disney movies, you’re automatically dubbed a role model to young kids whether you want to be or not. Elle Fanning, and any other Disney star, is obligated to be a good influence to all of the youngsters out there who are following her every move and looking up to her. According to OK! Magazine’s inside sources, there were kids at the post office that obviously recognized Elle and witnessed her entire meltdown.

Ironically, Elle’s older sister, Dakota Fanning, has always been a sweetheart. Maybe she is a total diva behind closed doors, but she knows how to act in front of fans and when the cameras are rolling – unlike her younger and wilder little sister Elle. Elle Fanning is just 17 years old. Imagine how over-the-top she will be in a few more years!

Are you as shocked as we are by Elle Fanning’s not-so-sweet demeanor? Is she really a diva, or was she just having a bad day? Let us know what you think in the comments below!