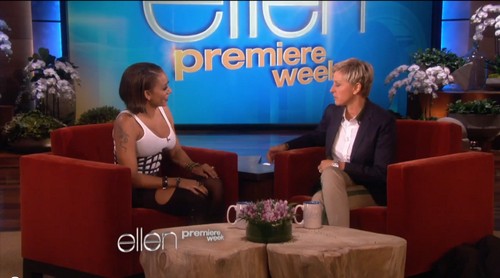 Ellen DeGeneres and Portia de Rossi are heading for divorce according to rumors circulating on the web that their troubled marriage is hanging on by a thread. According to several media outlets an imminent divorce has been hanging over the two women’s heads for months. And, Ellen’s budding “friendship” with Spice Girls’ member Mel B. could be final nail in their marriage’s coffin according to a new report from GLOBE Magazine. Considering Mel’s latest trip to the hospital after an overdose following her husband’s alleged brutal behavior, she could really use a shoulder to cry on – and Portia de Rossi is furious that of all the available shoulders, Mel has decided to cry on her wife Ellen’s.

The January 26th edition of GLOBE Magazine reveals, “Ellen DeGeneres has been comforting America’s Got Talent judge Mel B over her stormy marriage. And that has sparked big trouble with the talk queen’s jealous wife Portia de Rossi, who has been having nightmares that Ellen might run off with the bisexual former Spice Girl. Pals fear this new crisis could push Portia over the edge, especially since she has been looking scary skinny and she could be battling anorexia again.”

Mel B shocked concerned fans after reports hit the internet that her abusive husband Stephen Belafonte put her in the hospital, and then she reunited with her violent hubby over the holidays. And her fans were not the only ones shocked by Mel and Stephen’s reconciliation, Ellen DeGeneres immediately began trying to convince Mel to leave her husband for good and get out of the toxic relationship. GLOBE’s inside source explains, “After all she has been through, Mel could do for a break from men right now, and Ellen is right there for her.”

It’s no secret that Mel B has confessed to being bisexual and having sexual escapades with other women, which has always intrigued Ellen DeGeneres. Mel has been a regular guest on Ellen’s show over the years – and the two women flirt shamelessly on TV. So, maybe Portia isn’t as paranoid and jealous as the press makes her out to be. It sounds like Ellen has been pining away for Mel for years, and now that her marriage is in crisis Ellen is finally making her move, regardless of the fact that she has her own wife at home.

Do you think that Ellen is hoping to be more than just a friend to Mel in her time of need? Can you even picture Mel B ever hooking up with Ellen DeGeneres? Is Portia de Rossi just being paranoid and jealous again – or does she have reason to be? Let us know what you think in the comments below!