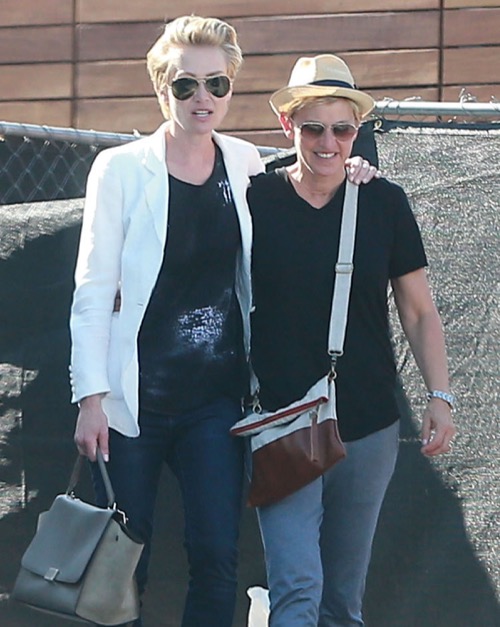 Ellen DeGeneres and Portia de Rossi are not adopting and insiders are worried this could be just another sign the couple is headed toward divorce. But why aren’t Ellen and Portia adopting? The reason probably isn’t all that complicated – DeGeneres can be a pretty selfish lady demanding it’s her way or the highway – and she doesn’t want a baby.

You never would have guessed that! Ellen put up a good front when she was fawned all over North West during Kim Kardashian’s recent appearance on “Ellen.” All that swooning and cooing had tongues wagging and wondering if Portia had convinced her wife that it was time for them to either adopt or look into a gestational surrogate and sperm donor.

But….none of that is happening. A source close to the couple told Star that “it’s been a difficult year for them behind closed doors.” Perhaps it has – the couple was rumored to be constantly fighting which led to Portia drinking way too much. Insiders said de Rossi checked into Passages Malibu in May 2014 and completed a 30-day drug and alcohol treatment program.

Even if all that is true the blame doesn’t fall solely on Portia de Rossi. For years the actress has put her career on hold while Ellen’s career was on the rise. Now it’s Portia’s turn – her career has been kicked up a notch as her status on the ABC drama “Scandal” has been updated to series regular – which means we’ll be seeing a lot more of Elizabeth “Lizzy Bear” North.

And this has Ellen DeGeneres PISSED! She wants Portia home – little acting jobs here and there are okay – but a full-time acting career for de Rossi has been off the table for years. And during those years Ellen has made promise after promise to Portia that they will start a family.

Is Portia is fed up with Ellen’s empty promises? If she can’t have the family she has always wanted Portia de Rossi is going to have the career she deserves. It’s de Rossi versus DeGeneres and Portia is putting her foot down this time – Ellen isn’t getting everything her own way anymore.

What’s going to happen to Ellen DeGeneres and Portia de Rossi’s marriage? Will Ellen’s selfishness mean the end of for the couple? Will the couple soon release a joint statement that they have decided to divorce – it’s amicable – they still love and respect each other – blah blah blah!