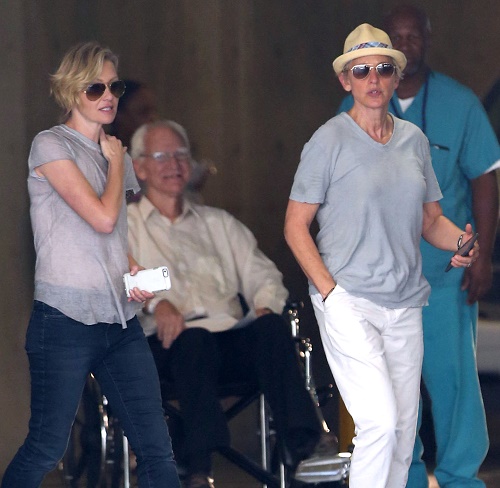 Ellen DeGeneres and Portia de Rossi have been tinkering on the verge of a divorce for months, and reportedly living in separate houses after fighting like cats and dogs for the majority of their marriage. It seems like all hopes of the couple repairing their relationship were lost, but according to a new report Ellen and Portia have finally gotten it together – and they are both quitting show business to save their marriage.

The June 1 edition of OK! Magazine reveals that Ellen DeGeneres and Portia de Rossi have decided the only way to save their marriage and avoid a divorce is to move to Australia, and quit their acting and daytime talk show careers. OK! explains, “The 57-year-old comedian is tiring of Hollywood and wants to head down under to focus on a quiet family life with her wife and Australia native Portia de Rossi.”

According to OK! Magazine’s inside sources, Ellen DeGeneres’s talk show contract is set to expire in 2017 – and when it does the daytime queen will be nearly 60 and plans to retire and pack up her wife and move to Australia. The only thing is…the last time we checked it was still 2015. And that means in order for Ellen and Portia to retire and move to Australia in two years – they will have to survive those two years without getting a divorce. The source went on to explain, “Ellen has enjoyed her time in the limelight, but she doesn’t need that forever. She wants them to ride off into the sunset together.”

We’re sure that Ellen’s promises of retiring and riding off in to the sunset together in 2017 thrilled Portia de Rossi, and may have put a temporary bandaid on their marriage problems. But how long will the fix last? Will Ellen and Portia be able to avoid a divorce for another two years? Let us know what you think in the comments below!