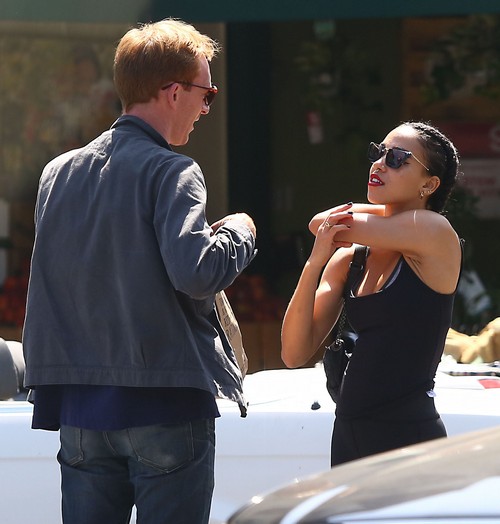 Seems FKA Twigs isn’t the only one rethinking hasty wedding plans – Robert Pattinson is now second-guessing his quickie engagement with FKA Twigs and is backing off plans to wed soon. And guess why? As with so many things in life, it’s all Kristen Stewart’s fault. No, Robert Pattinson isn’t looking to get back with his cheating ex, but it’s K-Stew’s cheating antics that have Rob on guard.

Robert Pattinson and Kristin Stewart seemed solid enough while they were shooting the Twilight movies – but that was because they were never apart. But once Kristen was out on her own filming Snow White & the Huntsman, she showed her sweetie that she was anything but snow white. In fact, Kristen Stewart was getting it on with married director Rupert Sanders.

And now that Robert Pattinson is shooting The Lost City of Z in Ireland then Columbia, he can’t keep an eye on FKA Twigs as she performs at various music festivals and venues. That’s what has Rob putting the brakes on their wedding plans. Rob was absolutely humiliated when photos were published of Kristen Stewart and Rupert Sanders making out and fooling around in public.

And it wasn’t just kissing – the photo series showed Kristin pushed back against the window of her car while Rupert Sanders did heaven knows what (we all know what…) out of sight with his head in her lap. These weren’t just cheating rumors – this was cheating fact caught on film and Robert Pattinson was crushed because he seems like a genuinely nice, if kind of clueless and goofy guy.

Even though Rob has no evidence that FKA Twigs will stray, the fear is still there for him. And as bad as it was for him to be cheated on by a girl friend, Rob definitely does not want to be betrayed by a fiancee or wife cheating on him. So while Rob is out of the country shooting and away from Twigs, he’s pushing back a little to see what she will do.

Right now, FKA Twigs is in LA to perform at a music festival and has been seen out and about with friends while Rob is hard at work on his latest film project. Rob still loves her, but he can’t bring himself to fully trust her – K-Stew has ruined his trust in women in general and he’s struggling to see past how badly his Twilight co-star’s cheating hurt him.

Rob wants to test FKA Twigs further before he commits – after all, Rob and Kristin Stewart were together for years before she cheated while he and Twigs have just hit the one year mark. Spending more time apart as Rob hops project to project is part of his plan to test Twigs’ fidelity and makes sure he doesn’t end up heart-broken and publicly humiliated again.

Will FKA Twigs be able to convince Rob Pattinson that she’s trust worthy enough to walk down the aisle? Or is he too scarred by K-Stew to take the plunge?