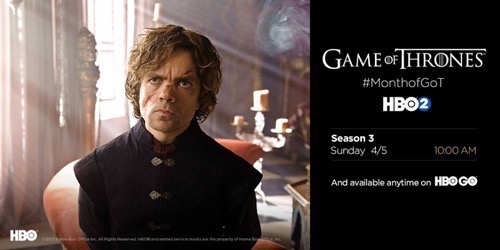 Tonight on HBO, Game of Thrones is back with an all new Sunday, April 12 premiere episode called “The Wars to Come.” On this evening’s episode, in the Season 5 premiere, Varys [Conleth Hill] struggles to convince Tyrion [Peter Dinklage] to think outside the box while discussing a potential occupant of the Iron Throne. Did you here about the first 4 episodes of TWD season 6 leaking?

In the season 4 finale, an unexpected arrival north of the Wall changed circumstances. Stannis decided to come and lend his hand to the Night Watch. Of course, Stannis had ulterior motives. Dany (Emilia Clarke) was forced to face harsh realities that if she left to go and claim her throne the slaves she freed will soon be enslaved again. Bran (Isaac Hempstead Wright) learned more of his destiny. Tyrion sees the truth of his situation. Did you watch last week’s episode? If you missed it, we have a full and detailed recap, right here for you.

On tonight’s episode, per the HBO synopsis, “in the Season 5 premiere, Varys struggles to convince Tyrion to think outside the box while discussing a potential occupant of the Iron Throne. Meanwhile, Stannis leans on Jon to secure loyalty from a rival; Daenerys ignores tradition to remain on her progressive path; and Cersei and Jaime try to move on from Tywin’s demise.”

Two girls walk through the woods. One of them says that they shouldn’t be out there, and is worried about what the other’s father will do when he finds out. The other girl tells her that she needn’t be afraid of her father. They spot a hut of sorts in the distance. Smoke billows from a chimney. They go in, despite one of the girl’s reservations. There’s a woman there. One of the girls, the bolder one, says that she was expecting somebody more terrifying. She demands that the witch foretell her future. The woman says, “Everyone wants to know their future…until they know their future.”

The girl tells her that this is her father’s land–her land–and to tell her her future. The woman agrees–with a slight smirk. She draws a dagger and asks the girl for her blood. The girl cuts her finger and spills her blood, which the woman sucks. The girl gets three questions, to which the witch provides her with three answers:

1. She won’t marry the prince, she’ll wed the King.
2. She’ll be queen–for a time. Then comes another, one younger and more beautiful, to cast her down and take all she holds dear.
3. She will have 3 children, none with the king. “Gold will be their crowns. Gold will be their shrouds.”

We land in the present day, now aware that this scene was a memory occurring in Cersei’s mind. She gets out of her travel coach and proceeds up the stairs to see the body of her dead father, Twyin. She tells the mourners on the steps to wait. In the church, she meets with Jaime. She’s pissed at Tyrion–and equally as pissed at Jaime, who freed Tyrion.

Tyrion is being transported in a shipping crate. He’s let out on dry land. Varys, who assisted him in his escape, is by his side. Varys has brought him to one of his colleague’s homes. Varys tells him that things have not gotten better since they set sail–and that they need to do something to restore the promised future to their country. Tyrion says the future is shit–just like the past.

One of Dany’s men goes to a brothel and asks for time with a lady. She asks if he wants the usual. He agrees. They lay together and she sings to him. As he drifts off to sleep, someone in a gold mask slits his throat.

In Dany’s layer, she examines the gold mask, and wonders why the Sons of the Harpy are choosing now to attack. She orders her people to find them and bring them to her. She wants them destroyed.

Jon Snow’s training on the wall with a younger boy. Sam and his lady are also on the wall.

Jon’s practice is interrupted by Melisandre, who says to him that the King would like to have a word with him. As they ride th elevator to Stannis, Jon asks her if she’s cold. “Never,” she says, “the Lord’s fire spirals within me.” She then asks him if he’s a virgin, to which he responds no. “Good,” she says, with a smirk.

Stannis talks with Jon. Stannis swears that he will take back the North–and he wants th Wildlings to march in his army. He says that he’ll grant them pardon in his new land if they march with him. He wants Jon to persuade them to align with him–he has until nightfall to get them to agree to the terms.

Sansa is still with Petyr.

Meanwhile, Brienne and Gendry are in the countryside. B feels as if she’s failed everyone she’s sworn to protect. Sansa and Petyr’s carriage is rolling along and, inside, Petyr reveals to Sansa that he’s taking her to “a land so far away even Cersei Lannister won’t be able to get her hands” on her.

Cersei’s at the gathering celebrating her father’s memory. She sees Margaery whisper something to Tommen, and brush against his fingertips as she walks away.

She’s attached to her wine as always.

Margaery walks in on her brother, Loras, fondling a blond guy, Olivar. They talk about what’s happening in the future. Right now, Cersei and Loras are set to wed–because Cersei is planning to get to High Garden. This seems to be the plan…but perhaps Margaery, always scheming, has something else in mind?

Tyrion continues to drink away his guilt and worries and hatred. Tyrion asks why he would risk EVERYTHING to save him. Varys admits that he didn’t do it to save him but, rather, to help save the future of the land. He says that he finds it’s ideal to save those people who possess talents. Tyrion asks Vary what exactly he wants. Varys admits that he wants peace. Varys says that the Iron Throne needs someone stronger than Tommen but gentler than Stannis. He says that the land needs a ruler who can be both loved and respected–one who doesn’t rule with horror and fear alone. Tyrion says, “Good luck finding him.” Vary says, “Who said anything about a ‘him’?”

Varys says that what Tyrion chooses to do from here on out is up to him but encourages him to ride to Mereen alongside him in an effort to make contact with Daenerys.

Daenerys and Daario’s romance develops, and he encourages her to consider opening up the fighting pits, which her new subjects have requested her to do–in an effort to keep with their age old traditions. He encourages her to stay strong, to not go soft, for he moment she does, people will take advantage of her weakness.

She goes to visit her dragons, which she’s locked away in the pyramid dungeons. Let’s just say they aren’t too happy about that and basically attack her. She escapes, rattled.

Jon talks with the Wildling leader in an effort to persuade him to join Stannis’s legions. Jon encourages him to take Stannis’s deal–in order to save his people–but he says that by doing so he’d be turning his back on everything he’s worked for. Also, he’d lose the respect of his people. Jon tells Mance that he believes he’s making a great mistake. “The freedom to make my own mistakes is all I’ve ever wanted.”

Mance is led out of his cell. Stannis greets him and tells him that if he kneels, he will live and be granted mercy. Mance says, “This was my home for many years. I wish you great fortune in the wars to come.”

He’s led onto a pyre. Melisandre lights the fire and tells the Free People that this is what happens to those who choose the darkness. The fire consumes him. As Mance struggles to breath, Jon leaves the crowd.

A fire is shot into Mance’s chest.