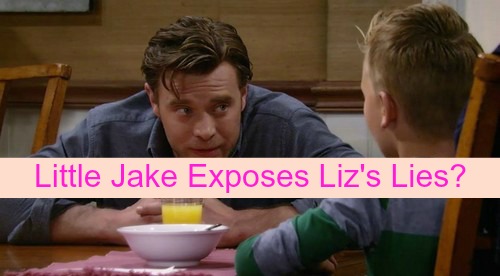 “General Hospital” (GH) spoilers indicate that little Jake Spencer (James Nigbor) is a troubled young man that will soon be making trouble for his mother. The Jason Morgan reveal has been made, but the trouble is just getting started.

Not only does little Jake have information we don’t know about from his time with Helena Cassadine (Constance Towers), but he also has tidbits he’s overheard while skulking around Liz Webber’s (Rebecca Herbst) house. But then again, maybe it won’t be Jake who blows up his mom’s life. Let’s consider.

First off, no matter what little Jake does, he’s got our sympathy. The kid was kidnapped and held by a known sociopath for years yet no none has tried to assess his psychological well-being since his return. And why?

Liz has been too embroiled in her romance with big Jake – aka Jason Morgan (Billy Miller) – and very concerned with keeping her dirty secrets safe. That hasn’t left her a lot of time to do any deep thinking about her son’s mental health. Shame on Liz. She’s been focused solely on Jason for a year.

Second, even when there were warning signs about little Jake – like when he assaulted his brother – Liz continued to drop the parental ball. Third, when little Jake spoke the truth about Jason being his father, Liz shot him down and diminished his statements.

Fourth, every time we see little Jake, he’s skulking like some terrifying yet cute blonde gargoyle. If looks could kill, Liz would be dead on the floor with every knife in the house sticking out of her. That kid is S-C-A-R-Y!

On Thursday’s episode (November 12), Jason will sit little Jake down and tell him that he’s really Jason, not Jake Doe, and is his biological father. Expect little Jake to say “told you so” but will the kid also tell his father that he knows because he overheard his mother talking to his grandmother Laura Spencer (Genie Francis) about the fact?

And if little Jake does bust out Liz for knowing his identity ahead of time, will Jason hear and believe him or will the adults go on disregarding the truth that kid is speaking?

If little Jake doesn’t blow his mom’s cover – who will? We know that Liz will have to face up soon to the lies she’s been telling to the man she loves. There has to be a reckoning and some accountability. There are “General Hospital” rumors swirling that Helena will come to town soon – she could blow Liz’s story out of the water, but people might not believe her since the Cassadine granny is both an emotional and literal terrorist. The odds aren’t great that Helena will blow up Liz’s lies.

Hayden Barnes (Rebecca Budig) is another story. She knows Liz has been lying and doesn’t like Liz after she cornered her at the hospital with accusations. But Hayden could hold off tattling on Liz because Nikolas Cassadine (Tyler Christopher) would be furious at her and she’s busy romancing him – albeit for ulterior motives we don’t know yet.

Hayden seems like a 50/50 bet to tell Jason the truth. She already tried to tell him once, but she may be scared she’ll catch another brain bullet for her trouble.

Another candidate is Robin Scorpio (Kimberly McCullough) who would totally be willing to blow up Liz’s life by telling the truth. Robin has a history of uncomfortable truth-tattling and she’s a huge advocate of Jason’s, so if Robin does show up in Port Charles and figures out Liz has known all along, she could publicly reveal Liz’s ugly truth.

So far, all we know is that Robin will make an appearance via a phone call this week but she may physically be in Port Charles soon so she’s a likely culprit to ruin Liz’s life.

Last, it could be Liz herself that blows it apart. How? Jason could overhear Liz talking to Nikolas or Laura about his identity and how long she’s known – or Sam Morgan (Kelly Monaco) could and Sam would run to Jason with this juicy tidbit.

On the Friday, November 13 episode, “General Hospital” spoilers indicate that Hayden, Nikolas, Liz and Laura will all talk about the truths about Jason that are not out yet and how they will move forward. If Jason or Sam learns about this meeting, all hell could break loose.

We know that there are weeks (and possibly months) of aftershocks that will unfold from #JasonRevealed and Liz’s lies are just part of this festival of misery. Stay tuned to CDL for more “General Hospital” spoilers on Jason and Liz as events unfold. And check back for detailed daily spoilers, casting news and more!