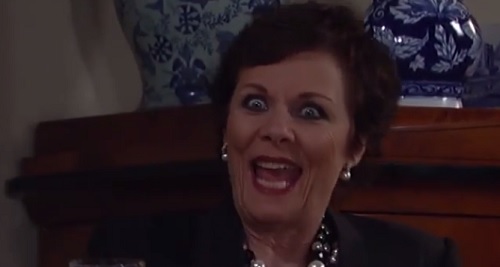 “General Hospital” spoilers tease that the episode of the ABC soap airing on Thursday, February 5 will be another exciting one packed full of drama and action. Rumors are floating around that Sonny Corinthos could be dead after jumping into the water with the exploding bomb in tow; however, the odds of that are slim seeing as how Maurice Benard just signed another contract with ABC. But the residents of Port Charles don’t know that, and they believe that the infamous mobster has perished.

The “General Hospital” spoiler video for the February 5 episode of the ABC soap teases that Michael will break the news to a frantic Carly (Laura Wright) that Sonny is believed to be dead. In the all new sneak peek video, Michael calmly tries to reason with his mother and instructs her, “Look me in the eyes and take a deep breath.” Carly isn’t the only one who will be receiving some devastating news on Thursday’s episode, Detective Sloane pays Kiki (Kristen Alderson) and Morgan a visit and breaks the news to them that Ava Jerome is believed to be dead as well.

In other “General Hospital” news, spoilers tease that on Thursday’s episode of the ABC soap Sabrina Santiago finds herself in sticky situation. Johnny Zacchara (Brandon Barash) is shot and seriously injured, however he can’t go to the hospital. So, Carlos Rivera begs Sabrina to put her nursing degree to good use and tend to Johnny’s bullet wounds – which is technically illegal and could be considered aiding and abetting. Julian Jerome (William DeVry) seems to be in the clear, and has received superb medical treatment at General Hospital. But, it may have all been for not because the “General Hospital” spoiler video for February 5 shows Fluke heading into Julian’s hospital room with evil on his mind. Fluke (Anthony Geary) taunts, “Hello Jules.”

So, GH fans, do you think that Sabrina will help Carlos and Johnny – or will she turn them into the police? Do you think Sonny Corinthos or Ava Jerome (Maura West) are really dead? Will Fluke kill Julian Jerome in his hospital room? Let us know what you think in the comments below and don’t forget to check CDL tomorrow for more “General Hospital” spoilers and news.