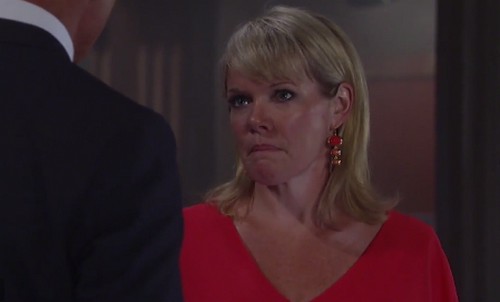 This “General Hospital” spoilers examines Ava Jerome’s (Maura West) unwilling return to mob life, why she’ll turn ruthless, and who could be hurt in the process. It’s interesting that Ava was so resistant to get involved when Paul Hornsby (Richard Burgi) told her to front the Jerome syndicate while he served as silent partner – remember Ava had already considered taking the Jerome mob for her own before.

You may recall she mentioned it to Julian Jerome (William deVry) while she was still wearing her Denise DeMuccio mask and Julian told Ava to have at it. But with Paul forcing her to do so, she’s protesting. Strikes me that Ava is the type of woman who just doesn’t like to be bossed around. So it will be interesting to watch her take the reins as she decides to embrace this opportunity.

This week, September 28 – October 2, we’ll see Ava make her public debut as the Jerome head at the meeting of the five mob families. With Michael Quartermaine (Chad Duell) showing up as the Corinthos chief, this will set up an interesting new dynamic. Where before it was Sonny Corinthos (Maurice Benard) vs Ava, now it will be the prodigal son vs the prodigal sister. This will be a great dynamic to watch.

Michael won’t fly off the handle as badly as Sonny tends to – he’s solidly in control of his emotions and a strategic, cold thinker. And Mikey certainly won’t give in to Ava’s feminine wiles like both his dad and brother Morgan Corinthos (Bryan Craig) have done in the past. Plus, we’ll see Morgan step up as Michael’s right hand and Morgan has a major chip on his shoulder about Ava.

Morgan blames Ava for his split with Kiki Jerome (Hayley Erin) and, in a way, also for his bipolar spiral. Also impacted by Ava’s “decision” to resume mob activities will be her brother Julian. He will initially be mystified by Ava’s decision to front the mob so soon after getting out of jail – because she’s risking a return to jail – but will have to accept it.

Julian may be truly out of the business for now, but he may not stay out with Ava at the helm. This will put Julian’s life at risk as well as his relationship with Alexis Davis (Nancy Lee Grahn). Also potentially at risk with Ava’s big mob move is her daughter Avery. Sonny will be out of the mob (at least for now) because he’s got a lengthy physical rehab process ahead to regain his ability to walk.

That means Sonny is out of the mob, while Ava is in, making Sonny the more appealing parent – in a fair and impartial legal system. We all know that Port Charles is far from that, though. Michael has the influence of Judge Walters thanks to Monica Quartermaine (Lesley Charleson) but Ava has DA Paul in her corner. This will make for an interesting custody argument.

Will Sonny be able to dominate in a custody battle, particularly now that he married (Monday, September 28) Carly Corinthos (Laura Wright)? Or will Paul’s influence assure that Ava gets custody? The bad news for Ava is, even if Paul can’t do what he promised and secure custody of Ava for her, he still has the leverage of the confession flash drive so Ava is stuck as the face of his mob business.

But Port Charles beware… if Ava loses her shot at custody of Avery, all bets are off. Ava has already lost Morgan and Kiki – and if she loses her chance to be with Avery too, Ava will have nothing left to live for but power and she will turn ruthless. Maura West told Soaps in Depth, “What Ava really needs is love but if she can’t have that right now, then she might focus some of her energy elsewhere.”

Another plot twist I’m hoping for is for Scotty Baldwin (Kin Shriner) to serve as Ava’s consigliore, much as rat fink Ric Lansing (Rick Hearst) does for Sonny. Wouldn’t that be fun? What will complicate things for Ava further is that Paul has either another partner or perhaps even a boss that he hasn’t told her about. More on that later in another CDL “General Hospital” spoiler. Stay tuned to CDL for tons more “General Hospital” spoilers, news and gossip.