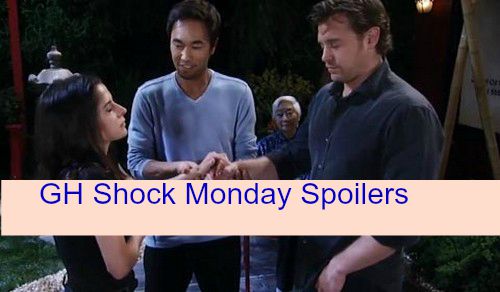 These “General Hospital” spoilers will get you ready for the September 28 episode. Look for two weddings, dire warnings and murky mob happenings on Monday’s episode.

Wedding #1 – Jake and Sam
Yep, you read that correctly. Before Liz Webber (Rebecca Herbst) can get Jake Doe (Billy Miller) down the aisle, Sam Morgan (Kelly Monaco) beats her to it. Sam and Jake are at Noodle Buddha chatting about Jason when the owner Mrs. Yi remembers Sam as the woman who got married there four years before. The woman is nearly blind and, with only voice to go on, thinks Jake is Jason.

Mrs. Yi insists they host a vow renewal for the couple and Sam and Jake awkwardly agree so as not to upset the old woman by declining her generous offer. Mrs. Yi hauls out her grandson to officiate and they say vows. When it comes to kissing the bride, things are stranger still but after some urging from the Yis, Jake will give Sam a little smooch. Fireworks – memories – bang. But still no revelation. 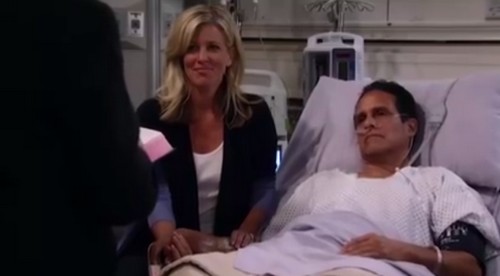 Wedding #2 – Carly and Sonny
Jake heads back to GH with Chinese takeout fresh off his wedding only to be asked to serve as witness to Sonny Corinthos (Maurice Benard) and Carly Corinthos (Laura Wright) getting re-hitched. Carly has convinced Sonny this is the best thing for Avery and their best shot at blocking Ava Jerome’s (Maura West) custody suit. Both Jake and Liz will act as witnesses for the bedside nuptials.

Liz feels guilty as she watches them get married, but will be stunned later when she hears that Jake got fake married to Sam. Shouldn’t that be a clear sign to Liz that Jason belongs with Sam and not her? Nah, Liz will keep on keeping on and works toward sealing the deal with Sam’s not-dead hubby. Patrick Drake (Jason Thompson) confides to Liz he may have messed up by proposing too soon.

Liz can’t let Patrick have second thoughts because it’s in her best interests that Sam and Patrick are fully committed. Liz boosts Patrick up and reassures him that Sam truly does love him and wants to be with him. Oddly, the faux ceremony with Jake will have Sam ready to say yes to Patrick’s impromptu proposal because Jake convinced Sam that she can move on and be open to new love.

At the 5 Families Meeting, Michael Quartermaine (Chad Duell) is surprised to see Ava take a seat at the other end of the table. Ava is put on the spot and asked to name Sonny’s shooter. Paul Hornsby (Richard Burgi) may want Julian Jerome (William deVry) blamed, but Ava calls an audible and fingers Carlos Rivera (Jeffrey Vincent Parise) as the shooter. Carlos can’t say he didn’t do it, so this seems like a good move. Is there a chance that Carlos is alive?

Will Michael buy this or push back and say that no one has seen Carlos lately? Ava can insist Carlos went rogue after shooting Duke Lavery (Ian Buchanan). The meeting ends with Michael threatening Ava – he’s totally channeling Sonny when he threatens to go medieval on her if she continues to mess with his family and the Corinthos family business. Ava will flex her muscle back at him.

Also of interest, with Ava the admitted head of the Jerome syndicate and Sonny retired from the Corinthos mob because of his injuries, will Ava’s “better parent” assertions hold water in court? Good thing Ava has Paul leaning on judges to help her. What could be really fun here is shared custody so we can watch weekly awkward hand-offs of baby Avery between Carly and Ava.

Anna Devane (Finola Hughes) has a warning for Alexis Davis (Nancy Lee Grahn). Anna can’t believe that Alexis really thinks that Julian’s hands are clean. Alexis defends her man then Anna moves her speculative gaze onto Julian and demands to know if he ordered Carlos to shoot Duke Lavery (Ian Buchanan). No way is Julian going to admit that’s exactly what he did. Anna will leave frustrated.

Secret mobster Paul tells Dante Falconeri (Dominic Zamprogna) that he’s excited to work with Dante who is obviously traumatized by his dad’s shooting. How excited must Hornsby be to have one of Sonny’s kids under his thumb? The guy is insidious – Paul is the perfect villain – nicely done, new writers. The big question is, who is Paul’s secret partner? Look for a GH spoilers post from CDL on that soon. Check back with CDL for daily “General Hospital” spoilers, gossip and more!