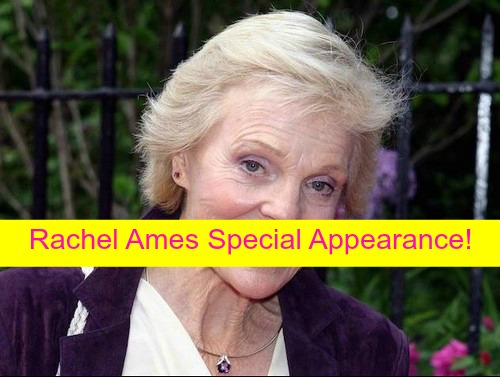 “General Hospital” (GH) spoilers and casting news reveal that GH alum Rachel Ames is headed back to the ABC soap opera and reprising her role of Audrey March Hardy. According to GH spoilers in the latest edition of Soap Opera Digest, Ames will appear on the Friday October 30 episode and will share a heartfelt scene with her Elizabeth Webber (Rebecca Herbst), and then she will give her a wedding present!

For those of you who don’t remember Rachel’s character Audrey March Hardy, she actually made her Port Charles debut all the way back in 1964, as a nurse at “General Hospital.” Rachel was on contract at the ABC soap opera from 1964-2002, and then she was knocked down to recurring status until 2007 and then her appearances became few and far between.

Friday’s episode of “General Hospital” will be the first time that Audrey has actually gotten some screen time on the daytime drama since 2012. Audrey is often referred to by Liz as her “Gram,” and it is common knowledge that she helps Liz look after her children – but she is never actually seen.

Now, Rachel Ames’ big return as Audrey March Hardy isn’t just important because she is popping up just in time to give her granddaughter a wedding present. (Especially since we all know the odds of Liz actually making it down the aisle at her wedding are pretty slim.)

Rachel’s appearance is monumental because she is the only original “General Hospital” cast member left on the ABC soap opera. Ames is 85 years old, and has appeared on GH for over 50 years!

So “General Hospital” fans, are you as excited as we are to see Rachel Ames back on our TV screens, even if it is only for a brief scene? Do you remember her glory days in Port Charles as Audrey March Hardy? Share your thoughts in the comments below and stay with CDL for  “General Hospital” spoilers, new and more.